This is a combination that has an initial attraction but the chemistry needs to last depending on the individual characters of both the partners involved here.The Aries woman likes to dominate the scene which the Scorpio man cannot taken for granted. However life would not be boring for this duo with the adventure-loving Aries and the mystifying Scorpio man held together. This is a high-energy-packed duo hence others around beware!!! 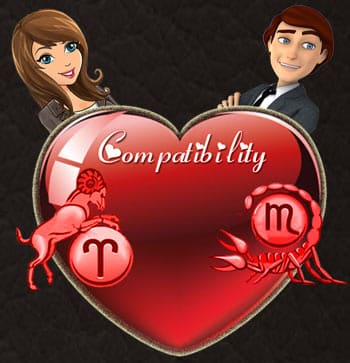 Not much of romance would be involved here as both would be more bent on worldy and domestic issues. Passion, the trait of the Aries would be put in the back burner by the Scorpio. But if romance is lost, it does not mean that everything is lost. The relationship still goes on full steam..

There would be a good amount of compatibility when friendship is involved between an Aries woman and a Scorpio man. Both aim for the best things in life and hence there would be mutual commitment to get things done. This would be more than the average friendship between the other combinations of the zodiac.

Compatibility for marriage in this combination is also reasonably good. However the duo are not much bent on getting married. They do not want it on paper and sealed and instead would be happy to settle down in a life-long companionship mode as well.

Much of thrills and excitement would be found in the act of sex here. The Aries needs to focus and the Scorpio needs to control the senses for things to work out well in the sensual level. They push the limits to the extremes.

When things do not work favorable in this relationship, the end result would be devastating for both. Aries ends the relations in a fiery mood and the Scorpio ends this as a sort of cold war. Once the bonds of mutual trust is broken then there is no turning back for this duo.