Though an Aquarius woman and a Pisces man seem to lead a compatible life together, their mutual existence would not be an easy affair. This is because their viewpoints differ a lot. The Aquarius woman loves fun and adventure while the Pisces man needs a committed and intimate relationship. The Pisces guy would not be able to give her the much needed freedom in life.

For the Aquarius girl, friendship comes first than love and she is meant to treat her partner more as a friend than as a partner which may not go well with the Pisces man. 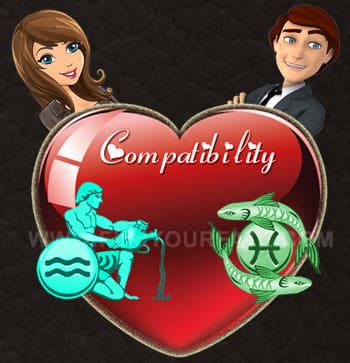 The Aquarius woman is not so romantic to talk about compatibility in this area.

The Pisces guy on the other hand would be more than willing to sacrifice anything for her, even his romance and passion. Aquarius female places much importance on friendship rather than romance. She also looks down on passion in a relationship as an utter waste of time.

An Aquarian female is not much of a friendly character to get along with. Though they talk much about universal friendship, true warmth would not be found in her. If the Pisces guy has bet on her love and friendship he better find solace elsewhere as friendship and compatibility are not to be found in an Aquarian female. They are known to show their love and affection and friendly approach to total strangers on the block while the immediate partner yearns for his real quota.

There would be better compatibility when an Aquarius female and a Pisces male are into a marriage. Much depends on how well the Aquarius girl has control over the Pisces guy. The Aquarius woman would be much strong-willed that she can bring him down on his knees. If the Pisces guy is committed then a positive marriage relationship would work out. Generally the Aquarians have an agenda and know how to keep their Pisces partner under their harness. Hence compatibility would not be much of an affair here.

Not much compatibility would be found when an Aquarius woman and a Pisces man are involved in sex. They are not interested in conventional modes of love-making. Instead the duo are more into involvement of external gadgets to improve their libido and sexual performance. Both are not much into satisfying the other partner while personal gratification might take the centre-stage.

When it is the end of the relationship, the Aquarius girl usually has to take the last leap. She has to decide to end the relationship as the Pisces people are known to procrastinate things and hang on to whatever is left.