When an Aquarius man and an Aquarius woman are in a relationship, it would be a very compatible affair as too much of an Aquarian character would not be seen in the combination. They stay as best friends for life and do not like to get into the fold of a committed marriage or relationship. Being airy signs they do all the talking and just know about everything under the sky. There would be better understanding with this duo. 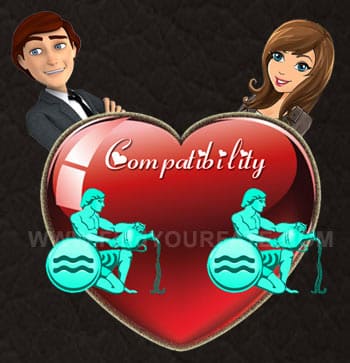 There seems to be no trace for romance between this duo as romance and intimacy are to be missed here.

Aquarians are known to have romance on an universal level !!.Passion is also not at stake with this combination. Being universal signs they are more bent on outside worldly affairs that personal intimacy and romance takes the backseat.

There seems to better compatibility when an Aquarius guy and an Aquarius girl are involved as friends in life. They need to be compatible as each other's best friends, 'cause there is none other in the world who can stay as friends with these Aquarians.

A compatible marriage does work out between an Aquarius male and an Aquarius female. Though they seem to live in their own worlds devoid of any connection with the human society on a sensuous levvel, there exists a special bond that ties them together. They share common ideals and values regarding life. Somehow or other homely chores get done and they find time together to be spent for a common universal cause. This duo conduct the partner as a friend and hence they happily exist together in a marriage despite odds at times.

Compatibility for sex would be just lacking here with this pair. Both take sex as a procreational affair and are not much bent on the intimacy or the physical connection involved. In fact they consider the human body as an error done during creation. Also they are known to experiment alternate modes of having sex. Everything is well and sound unless no dirty affair is involved.

When an Aquarius man and an Aquarius woman in a relationship decide to end their journey together, they just turn their back from each other and pace off in their own individual roads ahead. But the results would be doing more harm than good for both. Also they cannot travel too far from each other as they have none other than their respective partners for future troubles to be handled.