The other common names for the potato are Irish potato and white potato.

The potato is a perennial plant of the Solanaceae, or nightshade, family, grown for its starchy tuber. In recent centuries potatoes have become the world's most important tuber crop and its fourth most important source of food energy which is grown world-wide. Growers cultivate thousands of different varieties of potato. The potato has only a very distant relationship with the sweet potato. In areas of the United States where sweet potatoes grow commonly, people sometimes refer to the "Irish potato" to distinguish the two, a reference to the widespread cultivation of potatoes in Ireland in the 19th century. Potatoes were first brought to Europe in the early 16th century by Spanish tourists, but did not become a dietary staple until the 18th century. 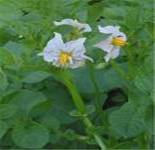 By the early 1800's, most of the people in Ireland were entirely dependent on potatoes for food. In 1845 and 1846 a fungus disease wiped out the entire potato crop in Ireland, and nearly one-half the population starved to death, while a million survivors left for other parts of the world. Today the potato is the most valuable crop in the US, and, behind rice, wheat, and corn, the fourth most important food crop in the world. The Russians lead the world in per capita potato consumption, and 90% of world potato production is in Russia and Europe.

The potato plant is a leafy, sprawling, almost vinelike annual to 3 ft tall and spreading out a little more. The compound leaves are about 10 in long and the 7-15 leaflets about 3 in long. The tubers are not roots, but modified stems or rhizomes, and the "eyes" are really leaf buds.

Potato flowers are rather showy: they are star-shaped, white, lavender, pink or light blue with yellow centers, about an inch across, and borne in clusters. The fruits are like small green tomatoes, about an inch in diameter, and contain several hundred seeds. The fruits, leaves and stems are poisonous.

Most soils will grow potatoes, but they prefer moist, acidic soil. To fertilize soil before planting, use well-composted manure. Fresh manure will burn the tubers.5-8 pounds of potato seeds should be sufficient to plant a 100 foot row. Potatoes are perennial. Left in the ground they will come up year after year. Nevertheless, they are usually treated as an annual, as the edible part of the plant is the root and the plant must be dug up to obtain it. Cut seed potatoes so that one or two eyes are on the surface of the potato, leaving some of the meat of the potato for initial energy for the plant. Plant with the eyes facing upward about 5 inches deep and 12-14 inches apart. Potatoes are typically planted 2 weeks or so before the last killing frost of the spring. As the potatoes grow keep weeds to a minimum, but do not hoe too deeply near the plants as the roots and tubers are relatively shallow. Remove and destroy insects as soon as they appear.

The roots, leaves and the tubersare the most commonly used parts of the vegetable for its commercial and medicinal purposes.

Potato plants have a low-growing habit and bear white flowers with yellow stamens which are in bloom from July to September.

Insects that commonly transmit potato diseases or damage the plants include the Colorado potato beetle, the potato tuber moth, the Green Peach Aphid, the Potato Aphid, Beet leafhoppers, Thrips, and Mites. The potato root nematode is a microscopic worm that thrives on the roots, thus causing the potato plants to wilt. Since its eggs can survive in the soil for several years, crop rotation is recommended. Other potato diseases include Rhizoctonia, Sclerotinia, Black Leg, Powdery Mildew, Powdery Scab, Leaf roll Virus, and Purple Top.

• A juice made from the tubers is used in the treatment of peptic ulcers, bringing relief from pain and acidity.

• A poultice has been made from boiling potatoes in water which is applied to rheumatic joints, swellings, skin rashes, haemorrhoids etc.

• Peeled but uncooked potatoes have been pounded in a mortar and then applied cold as a soothing plaster to burns and scalds.

• Potato skins are used in India to treat swollen gums and to heal burns.

• The leaves are antispasmodic.

• Potatoes are cooked or par boiled and eaten.

• Potatoes are used to brew alcoholic beverages such as vodka and as food for domestic animals.

• The water in which potatoes have been boiled can be used to clean silver and to restore a shine to furniture.

• Ripe potato juice is an excellent cleaner of silks, cottons and woollens.

• Potato starch is used to produce organic chemicals which are used in the textile industry, and in the manufacture of papers and boards.

• The starch is used as a base for biodegradable packaging.

• Emollient and cleansing face masks are made from potatoes; these are used to treat hard, greasy and wrinkled skins.

According to the astro reports the vegetable potato is under the dominion of the planet Mars.
Folklores and Myths

The potato "is considered to have been a pillar of Andean culture since domestication. Ritual ceremonies marked by singing, dancing, and drinking still take place throughout the year to ensure a successful harvest. Young men playfully drag young women across potato fields to make the land fertile. Cow horns and flutes are played to cheer on the plants and bring rains. Farmers from the Aymara and Quechua regions of Bolivia and Peru time the planting of their potatoes on the clarity of a constellation of stars known as the Pleiades.

When the constellation is bright and clear, the farmers expect early and abundant rains and a bountiful potato harvest and plant their crops in October. If the constellation is obscured by high cirrus clouds, the farmers anticipate drought and postpone their planting until November or early December. Mashed potatoes offer a method of divining who will be the first to wed. Into the heap of mashed potatoes a ring, a three penny-bit, a button, a heart-shaped charm, a shell and a key are inserted. Then all the lights in the room are turned out, and each guest, armed with a spoon or fork, endeavours to find the hidden charms.

The one who finds the ring win marry first; the three penny-bit signifies wealth; the button signifies bachelorhood or spinsterhood; the heart signifies passionate love; the shell, long journeys; and the key, great success and power. The potato has been an essential crop in the Andes since the pre-Columbian Era. The Moche culture from Northern Peru made ceramics from earth, water, and fire. This pottery was a sacred substance, formed in significant shapes and used to represent important themes. Potatoes are represented anthropomorphically as well as naturally.