The other common names for Jamaica pepper tree are English spice, Pimenta, Allspice and Myrtle pepper.

Allspice was discovered by Columbus in 1494 while he was searching for new sources of black pepper. It gets its name from the berry's taste, which has been described as a combination of cinnamon, pepper, cloves, and Juniper berries. Early Spanish explorers discovered allspice and because of its similarity to black pepper corns called it pimentia (pepper in Spanish). 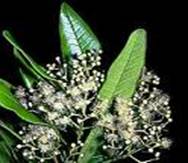 The botanical name is derived from 'pimenta' (Portuguese) and 'pimienta' (Spanish) which means 'pepper'. The common name 'allspice' is derived from the fact that it tastes like a blend of cloves, nutmeg and cinnamon. Allspice owes its healing powers to "eugenol", a chemical component in its oil. The first record of its import to Europe is in 1601. Allspice was much more popular in the early 20th century than it is today. Aromatic Allspice berries have a long history of use in Caribbean folk healing.

Allspice plant, of the myrtle family, grows about 9-12 m tall with erect trunk, bark grey; much branched, round topped and foliage dense. Leaves opposite, oval-oblong to elliptical, entire, leathery, glandular-pinnetate on lower surface; 12-20 cm in length, deep green and lustrous.

Flowers are borne on racemose cymes, small, white to greenish-white, each flower having four tiny petals, a single style with one ovary, two ovules and a cluster of anthers. As the flower opens, the style straightens, and although the stigma is raised above the anthers, the flower appears to be hermaphrodite. Berries are globular 4-7mm in diameter, hard with rough surface and a reddish brown colour. Pericarp woody, brittle and around 1mm in thickness. The berry has two locules separated by a thin partition. Each locule contains a single, reniform, hard and dark brown seed.

The tree yielding pimenta is a native of the West Indies, Mexico, and South America, and is abundant in Jamaica, whence its fruit received the name of Jamaica pepper. The allspice plant is cultivated in Central America and the surrounding countries, but more than half the supply to the United States comes from Jamaica.

Thrives in hot climates with moderate rainfall and friable, well-drained soils; is extensively grown in Jamaica, where it flourishes on limestone hills near sea. Thus the tree grows best in hilly terrain on soils rich in limestone. The allspice tree can also be grown in greenhouses in colder temperate and northern zones - however, the plant does not flower in cold climates.

The allspice tree is usually propagated in plantations using the seeds. These are collected only from the fruits of trees that have a high yield of berries annually. To get the seeds, the collected fruits are first subjected to soaking in water overnight, they are then rubbed and the seeds are slowly extracted by prying with a knife. Seeds collected in this manner are sown initially in nursery beds, in pots or in large basins to allow controlled germination of the seeds. The seed beds are normally mulched using dried leaves, straw, even paper or gunny bags to boost the germination rate. The normal time for the seeds to germinate ranges from nine to fifteen days.

It is possible to propagate allspice vegetatively by means of artificial grafts, through budding techniques, by approach grafting techniques and by top working techniques. Allspice plants can also be propagated by using techniques based on tissue culture methods. The ideal time for field plantation of seedlings is when they are about six to ten months old. These seedlings are normally planted by spacing then at 6m x 6m distances, seedlings are sometimes planted even closer than this to each other. In the seed beds, each single hole will hold three seedlings; an individual hole is about 60cm� in size. To ensure proper pollination of the growing plants, the female to male plant ratio in any garden should ideally be 8:1. When the plants are young, they require shade and regular irrigation to develop properly.

The flowers appear in June, July and August and are quickly succeeded by the berries.

Allspice plants are also vulnerable to leaf spot disease induced by Cylindrocladium quinqueseptatum or even to leaf rot caused by Pestalotiopsis - if these diseases are noticed, it may be necessary to take precautionary measures to ensure the proper growth of the plants.

The fruits and the essential oil obtained from the leaves are the most commonly used parts of the tree for its commercial and medicinal purposes..

• The berries of this plant contain oil that can relieve stomach aches, soothe sore muscles and ease toothache pain.

• In older eras, a medicine called the "Oil of Pimento" made from the pungent volatile oil found in allspice was often used to aid lagging digestion and to ease symptoms of flatulence in different patients.

• It is also used in treating hysterical paroxysms that affect some patients.

• The oil is also given on sugar and in pills to correct the griping tendencies of purgatives: it was formerly added to Syrup of Buckthorn to prevent griping.

• Pimenta is an aromatic spice, used in medicine chiefly as an adjuvant to tonics and purgatives.

• In Caribbean cuisine, allspice with its pleasing clove-like aroma is the most important spice and used extensively. Meat is often stuffed with allspice leaves and barbecued over a fire of allspice wood, similar to the use of myrtle around the Mediterranean Sea.

• The oil of Jamaica is used in perfumery.

• The wood which is very firm and hard with close texture, smooth surface and dark to light salmon colour is used for making walking sticks and umbrellas.

• Pimento water is agreeable aromatic water, used as a vehicle.

• The bark and leaves contain tannin and can be used for tanning purposes.

• It is also used as a mouthwash to freshen the breath.

• The fresh leaves are also much used for cooking or smoking meat.

According to the astro reports the Jamaica pepper is governed by the celestial body Mars. Astrology also says that it is under the masculine gender and is ruled by the element fire.
Folklores and Myths

According to the folklores the allspice is used to encourage healing. The Mayan Indians used Allspice to embalm the bodies of important leaders. It was believed to be used in mixtures and burned as an incense to ask for money and good fortune. Thus it has the powers of bringing back money, luck and healing. It is one of the spices Christopher Columbus discovered on the Caribbean Islands.