Hop tree was introduced into cultivation in 1724.Common hoptree (Ptelea trifoliata) is a small tree in the rue family (Rutaceae). The fruits have been used in beer as a substitute for hops, hence the name hop-tree. 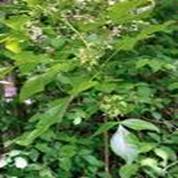 Common hoptree is taxonomically distinct in its northern range, but occurs with other Ptelea species and subspecies in southwestern North America. Genus name of Ptelea is from Greek (meaning elm) in recognition of the similarity of the seed to that of elms. In Canada, Ptelea trifoliata occurs almost entirely along the Lake Erie shoreline, where it is a component of the stabilizing vegetation. It is one of two native species on which the larvae of the rare Giant Swallowtail butterfly feeds. This species, with its aromatic and bitter substances, has had a long history of medicinal and economic usage, reviewed by Bailey (1960).

Typically grows to 10-20' tall. Features compound, trifoliate, shiny, dark green leaves (each leaflet is 2-5" long) which turn greenish yellow in autumn. Distinct oil glands are evident if leaves are held up to the light and viewed with a hand lens. Flowers are small and yellow-green and arranged in dense clusters. Terminal clusters (cymes) of tiny white flowers appear in late spring, but are not particularly showy.

Carrion flies pollinate the flowers. Flowers give way to pendulous seed clusters, each seed being encased in a thin, circular, winged disc (1" diameter samara). Seeds mature to brown in late summer and persist through most of the winter. Fruit matures in September or October and hang on the tree over winter. The fruit has an aromatic scent when crushed. The bark is dark grey and smooth, becoming craggy and fissured with age. The bark has an aromatic scent when crushed.

Hop tree's native range is Ontario and New York to Florida and west to Minnesota. It also occurs in Mexico. It ranges over a wide area, east through Louisiana, Arkansas, Florida, New York and Quebec; north into Oklahoma and through the Midwest; and west into Arizona, Colorado, Utah and California.

Hop tree is an adaptable species that performs best in well-drained, fertile soils in sun or shade. Typically found at an altitude of 0 to 2,793 meters. Thus it is easily grown in average, dry to medium, well-drained soils in part shade to full shade. Tolerates full sun. Adaptable to wide range of growing conditions.

Succeeds in any fertile well-drained moisture retentive soil in full sun or light part day shade. Seeds are best sown as soon as it is ripe in a cold frame. Stored seed requires 3 months cold stratification at 5°c and should be sown as early as possible in the year. When they are large enough to handle, prick the seedlings out into individual pots and grow them on in light shade in the cold frame for at least their first winter. Plant them out into their permanent positions in late spring or early summer, after the last expected frosts. Cuttings of half-ripe wood, takes place in July to August in a frame followed by layering.

The tiny white flowers of the hop tree are in bloom early summer from May through June.

The bark and the leaves are the most commonly used parts of the hop tree for its commercial and medicinal purposes.

• The bitter bark of the roots is sometimes used as a tonic.

• The root-bark is anthelmintic, antibacterial, antiperiodic, stomachic and tonic.

• It has a soothing influence on the mucous membranes and promotes the appetite.

• It is also taken in the treatment of intermittent fevers such as malaria, heartburn, roundworms, pinworms and poor digestion.

• Externally it is applied to wounds.

• The roots are a tonic, used in the treatment of asthmatic breathing, fevers, poor appetite etc.

• The leaves are said to be useful in the treatment of wounds and also in the destruction of intestinal worms.

• Hop tree is mainly grown as a hedge plant.

• Wood - hard, heavy, close grained but the tree does not grow large enough for commercial exploitation.

• The wood is very rarely used in making of light weight furniture's.

According to the astro reports the hop tree is influenced by the celestial body Mars.
Folklores and Myths

The Hop was first mentioned by Pliny who speaks of it as a garden plant among the Romans, who ate the young shoots in spring.