The other common names for the camphor tree are kapur and karpura.

Camphor is a white crystalline substance, obtained from the tree Cinnamonum camphora. Camphor has been used for many centuries as a culinary spice, a component of incense and as a medicine. Two varieties of camphor are mentioned by Sanskrit writers, namely, pakva and apakva that is prepared with the aid of heat and without it. 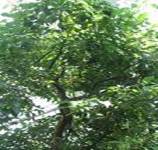 The latter is considered superior to the former. It would seem from the above description that by the term apakva karpura was probably meant the camphor obtained in Borneo from the trunk of Dryobalanops aromatica, (Shorea Camphorifera, Roxb) and by the term pakva karpura, the China camphor obtained by sublimation from the wood of Cinnamomum Camphora. In chineses it is called as Zhangshu, and the city Zhangshu in Jiangxi province, China, is named after it.

Camphor is an evergreen tree with oval to elliptical leaves, arranged alternately on the stem. Slender twigs are initially green but change to reddish brown. Buds are sharply pointed, roughly 1/2 inch in length. Camphor tree bark is variable, from scaly to irregularly furrowed with flat topped ridges. The camphor tree habit ranges from small to medium (25 to 40 feet tall), but some specimens have attained over 100 feet. Leaf margins are entire, but can be wavy with a shiny, dark green colour.

Fragrant flowers are greenish white to pale yellow, borne on panicles about 3 inches long. The fruit is dark blue to black, fleshy and approximately 1 to 1.5 cm in diameter. These are produced in large quantities during the winter and spring months in central and north Florida. The berries first turn reddish, and then ripen to black. Camphor is easily identified by crushing the leaves or peeling a twig or bark which will release oils and the scent of camphor.

Cinnamomum camphora, the camphor tree, comes from China, Japan, Korea, Taiwan, and adjacent parts of East Asia. Camphor has become widely naturalized in Australia and in the United States it grows along the Gulf Coast and in California.

It grows best in mesic forests and on well-drained sites along streambanks.Camphor will grow in full sun or partial shade. The plant prefers light sandy, medium loamy and heavy clay soils and requires well-drained soil. The plant prefers acid, neutral and basic alkaline soils and can grow in very acid and very alkaline soils. It can grow in semi-shade light woodland or no shade.

Cultivation of the camphor tree is carried out in many tropical and subtropical regions of the world, mainly as a source for the durable camphor wood - this wood is the base for the extraction of commercial camphor oil. The seed has a short viability and is best sown as soon as it is ripe in a greenhouse. Remove the fruit pulp since this can inhibit germination. Germination can take 1 - 6 months at 20°.Stored seed should be sown as soon as possible in a warm greenhouse. When they are large enough to handle, prick the seedlings out into individual pots and grow them on in a greenhouse for at least their first winter. Plant them out into their permanent positions in late spring or early summer, after the last expected frosts. Consider giving them some protection from the cold for at least their first two winters outdoors. Cuttings of semi-ripe side shoots, 7cm with a heel, June/July in a frame with bottom heat.

The fragrant flowers of the camphor tree are in bloom from March through June.

A disease called Laura wilt caused by ambrosia Beatle, specifically xylebrous glabratus.It is wiping out entire groves of theses trees at an alarming rate. There are evil vectors like ambrosia beetle and mistletoe which also causes great damage to the camphor tree.

The stem, root, wood, leaves, twigs and the volatile oil are the most commonly used parts of the tree for its commercial and medicinal applications.

• Camphor has been used to treat ailments ranging from parasitic infections to toothaches.

• All types of arthritic and rheumatic pains affecting patients, problems like neuralgia, and back pain can be treated using camphor.

• Camphor also acts as an expectorant and a febrifuge, meaning that it cools fevers and helps clear lung congestion.

• The plant has value in antiseptics and medications for treating diarrhea, inflammation, itching, and nervous conditions.

• Camphor can be blended with lavender, or tea tree in antibacterial and astringent blends to combat oily skin and acne.

• It is used externally in liniments for treating joint and muscle pains, balms for chilblains, chapped lips, cold sores, skin diseases etc and as an inhalant for bronchial congestion.

• The physical pains associated with external bruises, all kinds of sprains, with severe inflammations, with problems like gout, and with rheumatic joints were carried out traditionally by rubbing the oil of camphor into the affected areas of the body.

• Indeed natural history cabinets for entomologists are made from the wood.

• The penetrating, fragrant odour is a well known preventative of moths and other insects such as woodworm.

• It is commonly used for chests, closets, coffins, instruments, and sculptures.

• It can also be put in shoes to cure perspiring feet.

• Camphor is also used in perfumes.

• The old leaves are dried and used as a spice.

According to the astro reports the tree camphor is under the influence of the celestial body, Mars.
Folklores and Myths

A lump of camphor was traditionally worn around the neck as a protection against infectious disease. Older Camphor is bought by the Chinese at a great price and used in funeral rites but also embalming, being less volatile than ordinary Camphor. Indeed natural history cabinets for entomologists are made from the wood. Originally a species native to East Asia, the evergreen tree was traditionally used extensively in many East Asian cultures as a source for fragrant incense and wood. In Hindu potash and ceremonies, camphor is burned in a ceremonial spoon for performing aarti.The twigs and leaves of the camphor plant are used in the smoking and preparation of Zhangcha duck, a typical banquet and celebratory dish in Szechuan cuisine.