This herb remains as one of the most potent Chinese herbs used for eliminating heat and accumulated toxins from the human body. 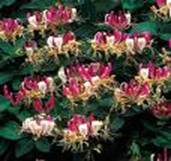 The use of the "jin yin hua" in Chinese medicine has a long history, and the herb was used as an agent to "clear heat and relieve toxicity," besides other uses.Lonicera, Linnaeus, is from a botanist, Lonicer, and Periclymenum, Dioscorides, was the Greek name of honeysuckle or a similar shrub.Chervell is a contraction of chevre feuille, an old French name for it, and Goat-tree is a translation of it, so also is Goat leaves. It is called perfoliate because the leaves cradle the stem and appear to have the stem pushed through the centre. The name of the genus, Lonicera, was given to the honeysuckle family by Carl Linnaeus (1707-1778), the Swedish botanist, in honour of the German botanist Adam Loncier (1528-1586).

Honeysuckle may be as much as 20 ft. in length. The leaves are egg-shaped, oblong, stalk less above, and shortly stalked below. They are bluish-white beneath. The tubular shaped flowers of the plants come in a variety of colours, the yellow-orange flowers of the European variety or the yellow-white colored ones of the jin yin hua.

It is native to much of Europe, growing as far north as southern Norway and Sweden. Thus the honeysuckle or "woodbine" is indigenous to southern Europe and the region of the Caucasus, though plants can be seen all over Europe except in the far north.

Best grown in partial shade, although it will tolerate full sun. Will reach a height of 15 to 20 feet. The plant grows wild in damp woodlands, but is also cultivated for its attractive, usually fragrant, flowers and colourful berries. The honeysuckle is commonly found growing along walls or forming hedges and scrubland.

To plant a honeysuckle, dig a hole larger than the root ball about 30 cm from a fence or wall and add compost. Fill the hole with soil so that it is level to the top of the root ball, firm in and water well. Remember to keep your honeysuckle moist through the summer during its first year. Honeysuckles need support and occasionally they also need a severe pruning. Left unchecked they can bring down fences with their weight. Approximately three years after planting, remove one in three of the shoots near to ground level after flowering, choosing the oldest of the shoots. Doing this will maintain a good display of flowers in subsequent years.

Lonicera periclymenum comes into flower in late May to early June, spreading its wonderful fragrance through the air particularly in the evening when the scent is at its strongest.

In some areas the species may be attacked by the honeysuckle aphid, a serious pest of many honeysuckle species. The honeysuckle witches' broom aphid (Hyadaphis tataricae) was first found in Minnesota in 1981. This aphid species feeds on many common honeysuckle species and varieties and is probably the most damaging arthropod pest of this shrub. Greenflies and powdery mildew also affect honeysuckle.

The most commonly used parts of the plant for its commercial and medicinal purposes are flowers, leaves and the bark.

• An oil expressed from the flowers, and gently heated, is used to restore circulation to the extremeties that have been numbed by cold.

• The plant has vasodilative properties that can increase blood flow to the surface of the skin.

• Tinctures are used for diarrhea or gastroenteritis related to food poisoning.

• The bark has diuretic properties and taken to relieve gout, kidney stones, and liver problems.

• The leaves are astringent and make a good mouthwash and gargle for sore throats or canker sores.

• The flowers relieve coughs and act as an antispasmodic used in the treatment of asthma.

• The leaves and flowers of the honeysuckle are rich in salicylic acid, so may be used to relieve headaches, colds, flu, fever, aches, pains, arthritis and rheumatism.

• Remedies made from the jin yin hua are mainly utilized in countering "hot" infectious disorders including abscesses, sores, and inflammation affecting the breasts, as well as dysentery.

• The wood has been used to make walking sticks because of its nature to grow around and entwine saplings.

• The flowers can be used for making teas, vinegars, jams, jellies and add interest to fruit curd.

• Scented cosmetics are made from the fresh flowers.

• Honeysuckle has been used to make a natural bluing agent for laundry rinses or as a blue dye.

• The dried flowers are used for adding to pot-pourri, herb pillows and floral waters.

• The flowers can also be used for decorating cakes and desserts and for making country wine.

The astro reports for the shrub honeysuckle say that it is governed by the planet Mars and being a hot martial plant it is under the sign of Cancer.
Quotes from history

Honeysuckle can be found listed in the 'Tang Ben Cao', a Chinese herbal which the earliest known existing pharmacopoeia is written in AD 659. The Chinese used honeysuckle japonica which they called jin yin hua as a cleanser and for removing poisons from the body. The poet Milton and the writer Chaucer amongst others referred to honeysuckle as Eglantine, a name more commonly attributed to the sweet briar rose by modern herbalists and people everywhere, except apparently for those in North Yorkshire where honeysuckle still goes by the name of Eglantine. Honeysuckle was one of the many medicinal herbs that John Gerard grew in his private garden. Eglantine is also another name for honeysuckle, used in John Milton's L'Allegro.

Its clinging nature in the language of flowers symbolises, 'we are united in love,' and emphasis's the bond of devotion and affection between two people. The Latin name caprifolium means goat's leaf, reflecting the belief that the leaves were once a favourite food of goats. It may also reflect the shape of the leaves, which resemble goat's ears.

In Scotland, it was believed that if honeysuckle grows around the entrance to the home it would prevent a witch from entering. In other places it's believed that grown around the doors it will bring good luck. If it grows well in your garden, then you will be protected from evil. Bringing the flowers into the house will bring money with them. Honeysuckle has long been a symbol of fidelity and affection. Those who wear honeysuckle flowers are said to be able to dream of their true love. In the Victorian era there was a ban on young girls bringing honeysuckle into the home because it was believed to cause dreams that were far too risqué for their sensibilities. Honeysuckle is one of the Bach Flower Remedies used to counter feelings of nostalgia and homesickness.