Originally though mundane astrology was used to study agriculture and war, today or the latest definition for mundane astrology says that it is the dealing of astrological study of world and political events. Thus when a horoscope chart is made on a country or an institution of some kind then it is also called as mundane astrology.

But in recent days with the latest development in astrological techniques prediction of, world and political events which is going to occur at different parts of the world at different times is also getting possible. It differs from personal astrology only by the simple fact that this is done for a person and the mundane astrology is done for the world or a country. In a personal astrology natal chart is done calculating the time of birth of a person and future is predicted by studying his horoscope chart. The different planets, zodiac signs and the different houses governing these, have different role to play in mundane astrology. 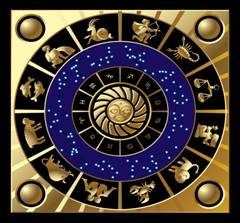 Each planet is significant and denotes different communities of nations of the world and its main area of focus. The higher officials in authoritative positions like prime ministers, aristocracy, magistrates, and judges and public figures like heroes and champions are all represented by the planet Sun. The Moon denotes the common person. Depending on where it is positioned in a chart the focus of the public attention can be predicted. Publishers, newspapers, books, and intellects are all concentrated by the planet Mercury and it also deals with a nation's communication and transport issues.

The entertainment field like the arts, sports, music and women and its related issue like birth, marriage and children are interpreted by the Venus planet. The war field and its occupants namely the military, navy, soldiers and its related areas like attacks, disputes, conflicts, and fire are dealt by the planet. Jupiter represents both the religious and the judicial world including priests and religious leaders as well as bankers and judges. The public sadness coming from deadly epidemics and funerals of elderly or of politically important person or the nations death rate is denoted by the planet Saturn. Uranus represents political tension such as rioting, fascism, individualism, right wing political ideas but it can also represent scientific discoveries. Socialism and communism is the main area of concentration of the Neptune. Illicit activities like covert plots, frauds and its related loss also comes under the governance of the Neptune planet. Major changes and rebirth is denoted by Pluto.

The houses in astrology have significtory roles and its placement in the natal chart of a country at different parts of time represents the different aspects of a nation's life.

It deals a vast area like the state of law and order, public health, government, reputation, valor and its position in the world, the general conditions of the country as a whole, people and their general outlook.

The purchasing power of the people, financial stability, and national income, strength of currency, budget and balance of trade are all ruled by the second house. Thus it deals with national wealth, status and relationships within country and with neighbors.

The fifth house is into the morals and values of the people. It governs intellectuals and deals with emotional stability, and communal harmony, speculative nature of the people, investments, stock exchange, children, population, and universities.

The sixth house takes care of political stability, financial solvency of the nation, litigations, judicial functioning, and communal harmony in the country, health of the public, labor relations and relations with neighbors.

Tourism, foreign affairs and agreements, pleasure and amusement resorts, bond of relationships amongst masses and business establishments are governed by the seventh house.

The eighth house deals with natural calamities like floods, earthquakes, cyclones, storms, accidents and epidemics. It is also into beliefs of the masses, red-tapism, speed of execution of works, delays and obstructions, gold and precious stones, legacies and capital gains.

The ninth house governs the general progression and development of a country. It takes care of judicial system, morality, religion, diplomats and foreign missions.

Depending on the income and gains the future plans are put and this is taken care by the eleventh house.

This area of astrology, namely the mundane grabs the interest of many people for it deals with the nation or countries current and hot topics. Even the noted British astrologer Charles Carter proposed that specific areas of life and politics can be correlated to each of the planets. The different zodiac signs in astrology is conjunct with various areas of society and is considered by most astrologers.

Aries deals with the self image of a nation and its projection into the world.

The economy of a country is studied by this zodiac sign.

Gemini influences a countries education; periodical publications; the post office, radio and transport; communications in general and science and its development.

Agriculture, the opposition in parliament and the land and its occupancies can be studied with Cancer.

It deals with the children of a society; sports, general amusements, national pleasure and entertainment are all looked upon by Leo.

The working classes like the armed forces and civil service and its health is influenced by this sign.

Any thing related with foreign affairs like wars and treaties are looked after by Libra.

Financial relations with foreign countries; public safety and crime are related with the zodiac sign Scorpio.

A countries religion, philosophy, science and the law and order is the main area of Sagittarius.

The local government, parliament and its assemblies are under this sign.