Mundane horoscopes are to be calculated with very much care than the horoscopes of the old tradition for in those days signs and houses are somehow analogous to each other. They share so many other factors which can be used to make the horoscope a tool of far more precision. Matter of minutes counts for a lot of difference in mundane

for if we calculate one and repeat the calculation for the same date and place but for four minutes later, we can see both the cusps and the planets, progressed backward by about one degree.

The natal chart or the horoscope of Germany is written considering the date of German empire coming into life which is on January 1, at midnight, in Berlin and majority of the German astrologers use this for their mundane predictions. The horoscope of Germany is ruled by the planet Mercury. The major period is taken up by Saturn and sub-period by Rahu.The 3rd house is occupied by the planet which is responsible for communications. Thus there is a good network of communication and transport also influences for an entrepreneurial and ruling disposition. But however Rahu in the 7th house to Mercury may also cause problems in these fields. 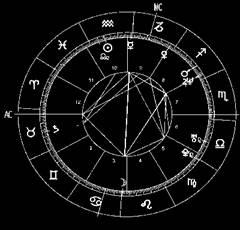 The fact that UK is one of the leading financial centers in the world is that because of Venus well placed in the 5th house. Setbacks in different fields like housing, automotive production will be seen because of the planet Sun on the 4th and 10th houses. There will be setbacks n the financial department because of Saturn which is not placed right and is also weak. Germany has a very strong military because of Mars placed in the 8th house. There will be big loss in its dealings or relationships with foreign countries because of the weak placement of the 6th lord Saturn in the 12th house.

Though the national character of USA is studied by considering the sign Cancer which rises high in the chart. The position of the Planet Mars in Scorpio to the Moon s responsible for their technology. It also depicts the bold and enterprising nature of the Americans, ability to be the first nation to send men to the Moon and bring them back alive, which are the answer for their fame and pride. Also Sun in Capricorn and seventh house is the lord of wealth which gives Americans a special status and influence in the world and a strong Presidency. Though there are controversies in the natal chart of the USA. However, most astrologers use either the Sagittarius Rising chart or Gemini Rising chart for studying USA horoscopes. Saturn in conjunct to Neptune ruling the second house acts directly on the American banking system. Such forecast shows structural weaknesses in the economy and increased stress levels due to unemployment of the Americans. From the horoscope of USA other factors which USA is going to be subjected is lost health care benefits, defaults on mortgages, and all of the other trials and tribulations to which our society will be subjected leading to epidemic of spiritual escapism.

The natal chart or horoscope of India is written keeping in mind the time and date of Independence from the British. This time gives 7° 46' Taurus rising in the sidereal zodiac. In the horoscope Venus rules the sign Taurus which is responsible for pleasures, materialistic pursuits and comforts of the Indians. The moon and ketu is also exalted in Taurus where the former symbolizes caring, tenderness and affluence and the latter spiritual pursuits. Mundane forecasts that the Indians are always convinced that they are always at right and are materialistic. The chart also have a negative indication when the North Node, Rahu rises in exact conjunction with Taurus Ascendant in Delhi, joined by Mrigasira, a Martian constellation, Saturn & the luminaries. The foreign policy and capital market is unstable threatened by war clouds because of the seventh lord is in the adverse 8th.The forecast from the horoscope of India also says that after a long battle the country will be in global power by 2100.Qualities like perseverance, adaptability, gentleness, good planning and prudence comes from the sign Taurus which is in ascendant. Jupiter is a functional benefic in India's horoscope, being the lord of 9th & 6th houses from India's Moon Sign, Cancer. Though economists say India will occupy the third place in economic power next to China and US which is because of the Jupiter in the fifth house.

The recent horoscope of Russia tells that it has a resurgent military and is going to get good revenues from mineral resources like oil for Venus the ruler of money is placed in Taurus and has a close trine to Neptune which is the natural ruler of oil. Because of Venus opposing Pluto there was a rift between Putin and oil tycoons for monopolistic control. The astrological reason for the rivalry between Russia and US is the Sun of Russia at 21°Gemini is in conjunct the U.S. Mars. The horoscope which reads the planet Mars which is well placed in Aries accounts for Russia's recent military exercises around the globe and also Russian war machine gearing up, and becoming much more belligerent and assertive. There is bickering about principles, ideals and practicalities of the Russians because of the repetition of Mars/Jupiter square mutable signs. Because Saturn in Aquarius has escaped from the rays of Neptune Russia is no longer a communist state. Russia has the capability to overcome difficulty because of the earth's dominance with the sun or moon trine.

The attractive, critical thinking and charming nature of British is due to Virgo which is a negative, human, earthy and barren sign. The power of analysis and discrimination is taken care of by this sign which is in the ascendant. The financial management is due to the consistent placement of Venus. Ketu in the 1st house has its own setbacks and is also the cause of peculiar image of the British in the world. The placements of 12th lord Sun, 6th lord Saturn and 8th lord Mars explain the rise and fall of the British Empire.