Vastu is basically a science of structures and completely deals with the directions. Vastu Shastra channelizes energy which emits positive energy from the five different elements of the earth on the occupants of the house. Thus it gives remedies for the well beings. Following vastu, results in prosperity 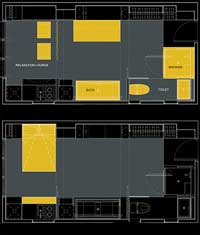 Sand and its surroundings bring peace and harmony or pains and sorrows in life.Usually vastu diagrams depicting the vastu mandalas are studied deeply in planning the site for a plot and also remedies of any Vastu Dosha prevailing in the directions of the plot. These studies says that a plot or a land should always be higher in the south,southwest or the west direction and water should always be concentrated in the Northeast, north, or east. When there are negative door entries, bifurcation of the plot, balconies in wrong directions, the pranic forces which is the air above the ground level till the height of 12 inches are to be restricted by embedding metallic strips made of either copper, brass, zinc and aluminium on the floor are buried according to severity of the defect.

A square or a rectangular plot is always considered to be the best. The four sides of the plot should be towards the four main directions. A hexagon shaped plot is also considered to be okay whereas a plot on a T or Y intersection is not auspicious. However if the shape of the plot doesn't abide with the vastu principle then we can create a perfect geometry inside the plot lines called the Vastu fence which creates a perfect universe for the house. Plot facing west is for those who provide supporting services to the society. If the plot of land does not squarely face the four cardinal directions or if there is no road running in one of the four cardinal directions then vastu remedies has to be done. Likewise the different direction faced by the plot is unique and is good for people in different fields. Plot facing east is good for scholars, philosophers, priests, professors, teacher's etc.Plot facing north is good for those in power, administration and those who work for government. Plot facing south is good for business class and for those who work in business organizations.

An electrical power supply station or large electric pole on the north east side of the plot it is not good for the vibrations and in such cases the remedy according to vastu is a pyramid. The placement of Pyramids is an effective concept based on mind over matter. The Pyramids are designed in such a way that it is ready in two sized kits of 3X3 or 9X9 numbers for correcting Vastu defects. However placing and positioning of the Pyramids varies depending on the size and shape of the structure, the plot direction and the severity of defects. Placing of an aluminium sheet around the Pyramid helps in the negative energy field inside the Pyramid to vanish. The enhancement and locking of cosmic field can be influenced by Pyramidical structures.

Light is another important factor in Vastu.Any plot near a fertile land or a river located on the North Side with its water flowing from West to East, or a river on the East side with water flowing from South to North, is also considered to be a good sign. The southern, western or the south west side of the plot if accommodated by mounds of Earth, big boulders, hills etc is considered to be good in vastu principles .

Care should be taken that there is no cemetery, tomb or graveyard close to the plot. Also plots near temples have a chance to affect the inmates. Plots having temple towards its right causes material loss, on the left causes sorrow and grief and in the front it causes obstruction to develop. For such cases vastu gives remedies whereby placing Lord GANESH & Lord HUNUMAN idols at the entrance or on the walls. This can also otherwise be achieved by Swastik which is recognized as an auspicious symbol all over the world.

The study in the field of bioenergy indicates that this symbol is associated with definite positive energy levels. Swastik symbol is the source of energy from the constellation of seven stars where the central point represents North Star Out of the four arms two represent the rising and setting point of seven stars, which are east and West, and the remaining two represent the North and South. Thus swastik symbol is also associated with astronomy because of its relation with stars. It is said to generate an atmosphere of devotion, pleasant feelings and a sense of well being.

Thus if a river or a drain flowing in a wrong direction and in a wrong movement then vastu advises to place a statue of dancing Ganeshji facing the west on the north-east corner of the house. Similarly if there is a problem where the boring has taken place then a picture of Panchmukhi Hanumanji, facing South-West to the boring is said to be considered as a remedy. When there is a high voltage wire passing overhead in a plot, then it is corrected by running a plastic pipe filled with lime from one corner to the other with both the ends remaining outside by at least three feet each. This will eliminate the evil effects of energy being generated out of the overhead wire.