Health and diseases of an individual is always said to be influenced by astrological factors like the positions of the planet. An astrologer can derive a natal chart by studying the position of the Sun, Moon, Mercury, Venus, Mars, Jupiter, Saturn, and the two nodes, Rahu and Ketu, their declinations at the date and time of birth of an individual. A horoscope not only predicts the future of

an individual but it can also reveal the physical characteristics of a person along with his health and diseases he or she is inclined to get. Thus the study of the two luminaries the Sun and the Moon along with the planets helps a lot in knowing about the health factors of an individual. The positions of the planets in the zodiac are taken and a person's "dasha" which shows when a particular heavenly body will dominate in a person's life are arranged. In olden days Hippocrates who was a famous physician use to first study a person's natal chart and then proceed with his treatments.

The influence of the planets on the signs and the houses is responsible for the health of a person which can be realized during the Dasa and Vidasa of a planet. Thus acute or chronic sickness occurs when the planets are not in the right position. There are other factors like time and space which is also responsible for other general sickness. Every organ of the body is governed by a planet or zodiac sign or a particular house. To study the health aspect the significance of sign, house (from Rasi) and the planets should be super imposed and synchronized. The sixth house, and its ruler along with the karaka of the respective house, Saturn denotes the diseases in Vedic astrology. The eleventh house is also an indicator of diseases. 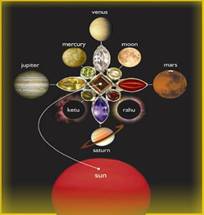 A person gets infected by diseases with aspect to the parts of the body in his natal chart ruled by its bhava and the rashi of malefic planets. Thus the person gets the disease of the body part denoted by the particular planet. A person is sure to suffer from hernia when his natal chart reads an afflicted sixth house, Virgo and its ruler Mercury. Similarly when there is an afflicted fifth house, its lord, Leo and Sun, then he or she is said to have liver problems. With the help of horoscope and Gochara, the life of living creatures governed by the planetary influences can be predicted.

In Indian astrology a sickness or a diseases can be diagnosed much earlier before its manifestation if a planet is said to receive bad aspects like square (90 deg) and opposition (180 deg).The prediction of the astrology is such that a diseases is likely to hit a person when the so called bad planets like s Saturn, Mars, Rahu, Kethu, Uranus, Neptune, Pluto are concentrated in the 6th house which is meant for disease or in the 12th house which is a place of death.

A mooltrikona sign residing in the lord of the sixth house is an indicator of health. A natal chart when reads Virgo, Scorpio and Pisces occupied by planets like Saturn, Mars, Rahu, Kethu, Uranus, Neptune, and Pluto, then it is sure for some diseases or the other. The moon is said to play a major role in functions of the human body for it governs the blood. Heart diseases are mainly signified by the lord of the fourth house and by the planets Sun and the Moon with the mercury being the primary indicator. When Mars is too weak in the Aries sign then it shows all signs of heart problems. The muscular parts and the arteries are governed by Mars and Jupiter respectively.

Permanent physical defects in the body like dumbness, squint eye, blindnesss, defects in the limbs etc. are mainly due to the position of the planets. Malefic planets like Sun, Mars, and Saturn as lords of Kendra's (1, 4, 7, and 10) are benefic. Benefic planets namely Moon, Mercury, Jupiter and Venus as lords of Kendra's are malefic; but posited in Kendra are benefic. When the planets like Mars, Saturn or Rahu occupies a moon sign then it will result in defects in urinary organs and sex organs.1st and the 7th house with a malefic conjunction of Saturn and Mars results in impotency.

Sun or Mars in birth sign/Rasi aspected by Mars or Sun, the native will have lung diseases. Saturn in Libra afflicting Mercury induces very obscure spasms in the blood vessels of the kidney which frequently is confirmed only after many tests of the blood samples simply because the condition goes on changing with the movements of the planets. Similarly a thorough study on appendicitis and its kind and its astrological influences is studied and concluded that Rahu and Mars in respect of the 6th House reveal one's susceptibility to appendicitis. Mars is the most energetic among planets which governs bone marrow, immune system of the body, and sexual drive. So any malfunctioning of the above is the result of Mars in the wrong place or position. Any planet posited in the evil house like 3rd, 6th, 8th, and 12th, houses give the owners a malefic effects.