Medical Astrology is the science that analyzes how these imbalances can manifest in our physical body. When the natal chart is studied in light of present or future planetary movements (transits), Medical Astrology also provides insight into the timing of events and may give us clues as to when problems may begin, or fade off. In Astrology Human Body has been divided in to 12 parts and they have 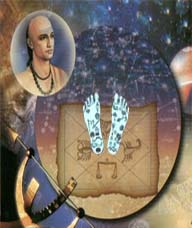 The head and the face are the main parts of the body denoted by the first house. It involves the complexion, cranium, forehead, brain, hair, pituitary glands, etc.

Throat and the ears are the main parts of the body signified by the second house. It generally rules the organs like nose, throat, mouth, tongue, teeth and eyes, especially the right one), facial bones, upper neck and its bones, gullet, larynx, cerebellum, trachea, cervical region and cervical bones, tonsils, etc. Implication of poor digestion, disorders of speech, throat, cervical, gums, eyes, teeth, etc., and diseases mainly arising out of a weak venous system shows a weak second house in your natal chart.

Digestive organs, stomach and breasts are the organs governed by the fourth house. If the fourth house is weak in your horoscope it results in coronary problems, physical ailments of breast, chest, heart and lungs' disorders, mental disorders, lunacy and the problems connected to the circulatory systems. Affliction of the fourth house by the sign of fire and when aspected by Mars indicates surgery in digestive systems whereas with watery sign affliction, diabetes and diet restrictions are likely.

The various parts of the body under the control of the eighth house are the sex organs, bladder and the muscular system, scrotum and anus, outer sexual organs, excretory organs, pelvic bones, etc. Saturn posited in the 12th house, with the lord of 8th in the 2nd house premature death is indicated. Health disorders like fissure, impotency, piles, urinary infections, boils, chronic diseases, etc are due to a weak eighth house.

The tenth house is involved in governing the body parts like knee and kneecaps, joints and bones. Health related problems like arthritis, broken knees, inflammation of joints, general weakness, skin diseases and allergies, emaciated body, etc are due to a weak position of the tenth house.

The eleventh takes care of the body organs like shanks, ankles, shin bone, right leg, left ear and left arm. Circulatory problems, fracture of the lower portion of legs, pain in legs, problems of low productivity of blood, cancer of leg, etc.generally happens when the birth chart of an individual shows a weak eleventh house.

The organs under the control of the twelfth house are left eye, lymphatic system and feet. A weak twelfth house causes sleep disturbances and weakens the immunization power. An afflicted 12th house occupied by Venus makes the person sterile. There are chances of serious eye defect or even blindness when the moon is posited in afflicted 12tn house.