This is one combination that has the best compatibility for a relationship among the zodiac signs. The Scorpio woman and the Pisces man have a sort of attraction that binds them together. They would be loyal and are fully committed to their partners. The Scorpio girl would help the Pisces man attain his dream and he would give her the security she yearns for in
life. They would be perfect partners for each other. They strive to bring out the best in each other. As both Scorpio and Pisces understand deep feelings and bond with others easily, this would be an easy combination. 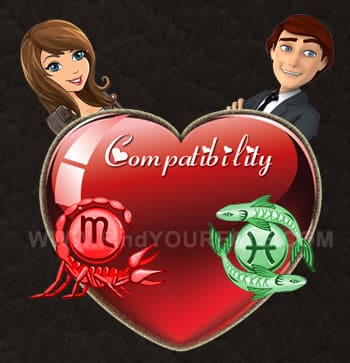 There would be better compatibility for romance between a Scorpio girl and a Pisces guy. The Pisces guy woos her with flowers, gifts and what not which the Scorpio girl acknowledges instantaneously. Passion is something that is at its peak with this combination. They would be much passionate towards each other, they love one another whole-heartedly and this passion cannot be seen elsewhere.

The Scorpio female and the Pisces male make great friends for life and hence share a higher level of compatibility in their comradeship. They would just give up their life for each other. Committed and trustworthy they make one of the best combination for friends in the zodiac.

A Scorpio woman and a Pisces man share a superb level of compatibility for marriage. Both would be emotionally connected with each other. As loyalty and true feelings are found here this relationship survives for life. There would be peace and harmony in the marriage. The Scorpio brings in the intimacy and the Pisces guy bring his dreams and fantasies into the marriage.

The Scorpio woman and the Pisces man in their sexual encounter engage in a highly compatible affair. It would be a total merging of two souls and later the merging of two physical realms. It would be a soulful experience for both. Scorpio is knows for eroticism and Pisces for his romantic moves that there would be bliss here.

This is a very compatible combination that is unlikely to end in any case. But if at all rifts appear and the duo decide to part ways then it would be a difficult split for both. Neither can live without the other. There would be mutual appreciation and dependence that simply coping in life without the other would be a Herculean task for both that it is better if they stay put together..