As there is marked differences in the nature of a Scorpio woman and an Aquarius man, there would be issues with this pair. For the relationship to work much commitment and understanding is asked for. But both being intelligent will never run out of ideas for work and conversation. The Scorpio girl asks for security in life which the Aquarius guy would be unwilling to give and his sarcasm would drive her nuts.
As both are energetic this would be a powerful combination that can accomplish things if they agree not to disagree. The Scorpio woman would not be able to pocket him with her seduction tricks as she can with the other signs. 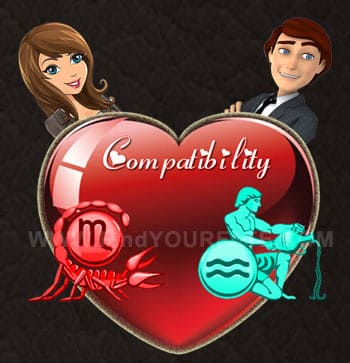 A Scorpio woman and an Aquarius man make great friends for life. They just gel together as both are loyal and trustworthy. They would not let down their partner at any cost and betrayal is also unheard of here.

There would be much compatibility when a Scorpio female and an Aquarius male are involved in a marriage. as both are loyal and stick to their stands they make a stable married life. They do not cheat each other and are unlikely to stray and hence they stay together for life. The Scorpio girl makes all efforts to bring a congenial atmosphere for the Aquarius guy and he makes sure that the sting is taken out from her as soon as he enters wedlock. There would be no inner games involved and it would be a transparent relationship. This combination will have a successful stint in marriage.

As the Scorpio female and the Aquarius male are greatly compatible for marriage and friendship, the compatibility would also be extended for sex. Together they have a great feast here in this arena. The Scorpio girl arouses the Aquarius guy and they explore unknown territories here. With loyalty and mutual trust there would be much fantasy in their sexual domain.

The combination of a Scorpio woman and an Aquarius man would last a lifetime and even more. But then if fate would have it to end then there would be much civility involved in the split. Both would hide their pains and have respect for the other. Even after a long period of separation, they would have hopes for each other and yearn for a happy relationship yet again.