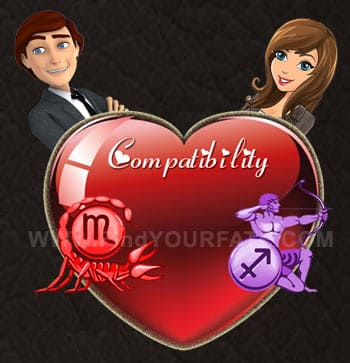 Between a Scorpio man and a

Sagittarius woman not much romance is seen, but there would be great intensity and much passion.They just do not have any time for romanticizing around with each other. Passion for one another would be just out of bounds here. There would a long lasting bond due to the great compatibility for passion with this duo.

The compatibility for friendship would be great between a Scorpio guy and a Sagittarius girl. They have mutual respect for each other. Add to this loyalty and trust takes them on a compatible road in comradeship. They make one of the best friends in life.

There would be a compatible relationship when a Scorpio male and a Sagittarius female are involved in a marriage. Honesty, commitment and respect for each other just bonds them together in the marriage. They settle down time and space disputes amicably and in a sensible way. As both are adept in handling material resources and communication issues there would be no compatibility issues when they are married. Each finds the other one the most satisfying spouse in life.

The relationship between a Scorpio man and a Sagittarius woman is unlikely to end as there would be mutual forgiveness and loyalty and honesty involved in the relationship. But then if it had to end then the Scorpio guy should be taking the initiative. The Sagittarius woman on the other hand would be love-struck and would quit the scene in search of greener pastures.