The Scorpio man and a Pisces woman share deep levels of compatibility in a relationship. They share a great chemistry as they match on an emotional level. Feelings drift about seamlessly here with this pair. The relationship would be packed with love, loyalty and honesty. The Pisces girl brings out the best in the Scorpio man.He in turn would be so protective of her and gives the security she desires for in life.
Possessiveness would be the only negative trend in this combination. This is simply a relationship made in heaven. 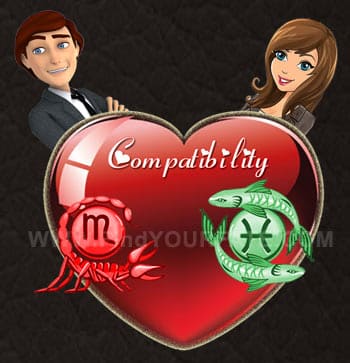 There would be much compatibility involved in romance with this duo. Pisces brings out the romance from the inside of the Scorpio guy.

There would be a mutual exchange of emotions and feelings which no outsider can understand. Scorpio brings his passion to the fore here. The Pisces girl would give him the much needed confidence in life and he can confide in her everything that life gives to him. Romance and passion are just top of the chart here.

The Scorpio man and the Pisces woman do not make great friends in life as this would be a very gender specific combination. Though the duo share a great bonding they do it in a romantic and intimate level and does not have comradeship qualities to pursue. The Scorpio guy would be more manly and the Pisces girl very feminine that this would be a combination for a marriage or intimate relationship and not friendship.

Marriage would just be a compatible affair between a Scorpio man and a Pisces woman. They make a happy home, comfortable for the kids, and there would be no financial and emotional droughts. With time, they stand bonded together strongly. There would be much trust, honesty and loyalty seen in this marriage. Commitment and better understanding gives the stability for the marriage. This is a great combination for a long lasting marriage.

The Scorpio man and the Pisces woman share better compatibility when it comes to having sex. This would be the best way of communication with both. Both are not verbal and sex serves as an outlet to let their emotions and feelings flow through seamlessly. It simply brings them together. it would be a perfect communion of two bodies and two souls.

This is a very compatible relationship that should never end at any cost. But then if fate would have it that way then the Scorpio man would be much protective of the Pisces girl. He makes sure that she would be secure in life in future. This is one relationship that would have a number of splits and rapprochements.