There would be much compatibility between a Scorpio man and a Capricorn woman in a relationship. They would last long together if they compromise on their negative traits. They share a greater chemistry with each other. The Scorpio man would bring out the passion in the Capricorn woman. She in turn would give him the much needed security in life.
There would be a perfect balance between the two. Together they strive to achieve higher status in the society around them and in their professional lives. Material resources mean a lot to them. 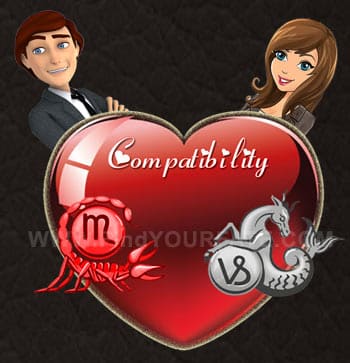 it would be a serious professional-sort of relationship. Both think that it is an utter waste of time, just romancing around each other.

The Scorpio male and the Capricorn female make a compatible friendship as they are more committed and loyal to one another. It would be more than friendship as there would be confidence and intimacy involved with the duo. Together they strive to attain certain goals in life- happiness and material resources to name a few.

There would be a compatible marriage between the Scorpio man and the Capricorn woman. This is because they are committed to each other. Even if one falters, the other one runs the show devoid of troubles. When the duo enter into wedlock they know what is expected of them and what they are deliver. Hence it would be a seamless relationship. Both know that high stakes are involved in the marriage hence they strive together to make it work despite occasional hindrances.

When it is the end of the road between a Scorpio male and a Capricorn female then it would be a total bloodbath on the streets. There would be destruction on either sides. Both turn colder to the other one and the split would not be taken that easily in both the territories. Mutual resources would suffer a lot on account of their end game.

• Scorpio Love Match with Other Signs