Better compatibility exists between a Sagittarius woman and an Aquarius man in a relationship. There would be true love found here and each enjoys his or her freedom. Passion rules the roost here , but then they are not much dependent on each other in life. Life would be full of ups and downs and they enjoy it together.Both are out of conventional lifestyles and like to have fun and adventure in life.

They are interested in out-of-the-box topics and are seen to venture together in these areas. 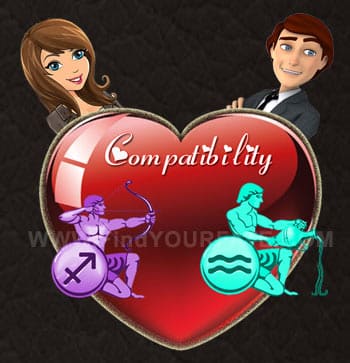 Romance is not found here with this

duo that compatibility in this area is out of question. Though the Aquarius man might have some passion, the Sagittarius girl smothers it down. She drives him towards adventure and social causes rather than romance and emotions. Romance just can't be found here with this duo.

An Aquarius male and a Sagittarius female do not make great friends in life. When the going gets tough they just do not stand together. Both are not interested to care about the personal problems of the other. They cannot be friends in need and are not good bedfellows either.

The Sagittarius woman and an Aquarian man in a marriage do not make a compatible combination. This is because here the gender roles are bent and they both focus out of their personal lives. Hence family would get a nice beating. Though they share mutual interests on philosophy and the like the growth of the relationship would not be smooth. Both do not mature with age well enough to lead a contended married life. Hence better compatibility would be found missing here.

The duo do not share better compatibility in sex either. Both have a common disinterest in sex as their interests are more mental rather than sensual or physical. They have other ways of expressing their love rather than by sex alone. Eroticism is totally absent in this combination.

Between the Sagittarius female and the Aquarius male in a relationship, true love is difficult to find that the chances of a rift are very likely. But both deny that they are in a relationship either. Hence the split would be more than comfortable for both...

• Sagittarius Love Match with Other Signs