There would be compatibility between a Libra woman and a Pisces man in a relationship. The Libra woman showers much love and affection on the Pisces guy and he likes it. But he is too dreamy to be practical about life. There would be much romance and passion in the relationship but the stability would be under question until the duo stick to their commitments.
Both love the good things in life and make sure that there is peace and harmony at home. These two tender hearts just stick together unless destiny plays pranks on them. 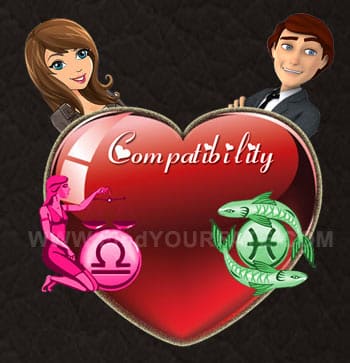 There would be much romance and passion involved in this combination. This would be a romantic pair who watch the sunset together holding hands.

A Libra woman and a Pisces man make compatible friends. Both of them have good mannerisms and stay polite together. They love to listen to each other and then talk. Compromise works out easily here that comradeship would be an easy game for this duo in life.

This would be a very good combination for a compatible married life but then the duo are not much used to rearing of children. The Pisces guy should make sure that he turns up for his partner when she most importantly wants her. The emotional side of the Pisces fellow might mar the relationship sometimes. The Libra girl is not one to be much messy with relationships and emotions. She wants a clarity in her relations with the partner.

A Libra woman and a Pisces man share compatibility in their sexual behaviors. But the Pisces guy would find it difficult to read her sexual needs and desires. She just hides her sensuous desires under her coat. If the Pisces guy could arouse her then it would be heaven here.

When a Libra woman and a Pisces man in a relationship have decided to quit their partnership or relationship it would be a beautiful end. There would be no grudges or false promises. Though the relationship could not survive they make sure that they just love the other one for life.