This is a combination where the compatibility depends on how well the duo contribute for a common cause. The relationship calls for lots of compromises and adjustments for survival. The Libra man's stability and the Capricorn girl's enthusiasm takes the relationship for long. Both have a liking for the finer things in life. They yearn for status in society and
success in life. If they stay together the combined fire would work wonders in their life. It would be more or less a business-like contractual agreement that keeps this pair going. 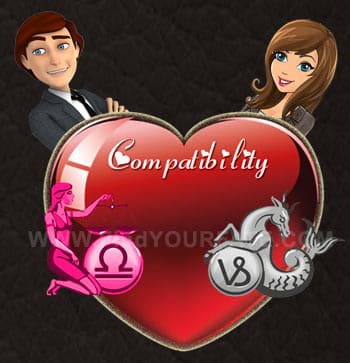 • Will Smith and Jada Pinkett.

This pair commands better compatibility when romance is concerned.

The Libra guy is romantic and the Capricorn girl likes it that way. He is one man who would woo his partner by his romantic approach. Capricorns on the other hand know how to appreciate and relish romance. Though there would not be much passion involved, the Libra guy makes all endeavors to bring out passion into the relationship.

The Libra man and his Capricorn woman have better compatibility when they are involved as friends as well. Though there would not be much rapport with this pair as comrades they have common civility that would mean friends to the outside world.

The Libra male and his Capricorn female partner usually share a compatible marriage. This would be a very sensible and practical combination. The logical Capricorn leads the marriage. She makes a deal with the Libra guy right from the start. He has to from time to time make all efforts to get into the good books of her. He needs to work a lot to keep the marriage going on the right track.

Sex would be more or less a compatible affair between the Libra male and the Capricorn female in a relationship. They treat it as a pass to get things done by the other partner. Each day they look forward to having sex and this steady dose keeps them going for years together despite occasional hitches in compatibility.