The Leo woman and the Sagittarius man share better compatibility in life. The adventurous and fun-loving Sag guy would be well-liked by the Leo girl.Both of them are very passionate and their chemistry bonds them together for life. Though there would be occasional hiccups the relationship can survive the test of time.The Sag guy need to be taken care of else he might stray.
But for this, this is a happy-go-jolly combination. The pair make good companions but there would be a dearth for romance and passion. 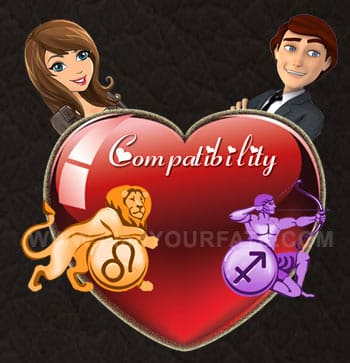 There would be no romance with this pair and hence compatibility in this area is ruled out.

The Leo lady known for romance might get a setback here in this area. Passion would not be for one another, rather it would be towards travel, and the like.

There would not be much compatibility when a Leo woman and a Sagittarius guy are friends in life. The Sagittarius guy makes friends with almost anyone in the block and this would be annoying for the possessive and dominating Leo girl. The arrogance of the Sagittarius guy stands in the way of their comradeship. Leo loves to dominate the scene while the Sag guy takes it over easily. Hence they cannot be friends for life.

The Leo woman and the Sagittarius man are not compatible for marital relations. They do not have anything in common to get along with life. The easy-going Sagittarius guy does not take marriage seriously while the Leo girl is just the opposite and needs a committed relationship. If she can take forward the relations in the positive direction then it is well and good else the relation is poised for disaster.

The Leo woman and the Sag man share greater compatibility when it comes to having sex. Both have it as a sportive event in life. It would be a kind of liberation act for both. They express their feelings and emotions through sex to the other partner. They do not have any inhibitions as to where they enjoy it. The Leo girl and the Sagittarius guy are so free to each other when sex is involved.

It would be usually the Sagittarius guy who would end the show. He cannot simply bear with the dominating Leo lady in life. He would mean that they can be friends but that is not going to happen with the irritated Leo girl. She would have her own regrets for having entered into a relationship with the Sag guy.