There would be medium level of compatibility between a Leo woman and a Pisces man. The Leo girl is an extrovert, likes to dominate the scene and loves to hog the limelight. The Pisces man on the other hand is an introvert and has a small circle around him and hence it would be difficult for him to get along with the Leo girl.But then their mutual romance and passion for one another keeps the relationship kicking and very much alive.
Though practical difficulties arise in the conduct of the marriage, their love and commitment for each other makes them hang out together for life. This is an enduring combination where each likes to hold his or her partner on high grounds. 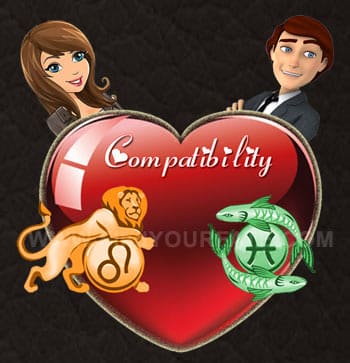 There would be much compatibility in romance between this Leo girl and her Pisces guy.

This is one combination where romance would be at its best. Leo likes to be paid attention while Pisces is ready to give the same. This relationship would be loaded with much kindness, warmth and tender affection.

The Leo female and the Pisces male make good friends in life. The Leo girl gives confidence and security for her pal. They are just happy to be with each other. Leo lady makes life easier for the Pisces guy. They get closer together with time as good friends for life.

This would be a compatible combination for marriage if the duo get to the practical side of life, particularly the Pisces guy. The Leo girl usually takes care of the practical matters but the Pisces man would be more than willing to oblige to her. The Pisces guy would be brought down to his knees by the love and affection showered by the Leo girl. This would be a pair that would stick to traditional marriage relationship and conventional home practises.

There would be greater compatibility in sex between a Leo female and a Pisces male. Though Leo loves to dominate the scene, the Pisces guy would make a good audience for her. Fantasy comes naturally for this duo and hence love-making would be a thrill for both.

When the end comes it would be most likely to be initiated by the Leo woman. Because Pisces usually carry on an indefinite motive in life. When the bubble bursts there would be much wounds on both the sides. Though they would not admit that the end of the road is near, it would be imminent. The Leo girl would finally come to live in the real world.