This would be a compatible relationship to the book. There would be much romance and love involved and both would be equally good in showering the same on his or her partner. The Libra guy has great tricks to woo his princess. There would be longevity and stability in the relationship.They follow the rules needed to keep a relationship going properly and stick to each other through thick and thin.
Mutual dependency is a must here with this duo for long term prospects. 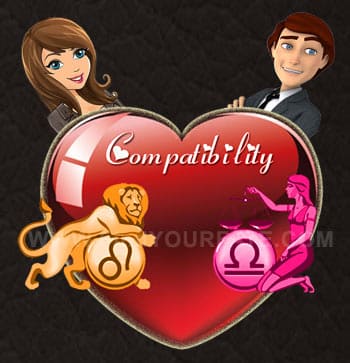 There would be much compatibility in romance between a Leo girl and a Libra guy.

Though the Libra guy would falter to show his romance off, he would keep her on her knees by his love of great taste in life. However the Leo girl hates being dominated. The Leo girl would be loaded with much passion. Hence the relationship would sail smooth enough.

The Leo girl and the Libra guy make great friends in life. Particularly if they have common goals in life like raising a family or growing in their career. They are cool-headed and their temperaments just match. Though Leo is not one to befriend easily, the Libra guy would bring out the friendly nature out of the Leo girl.

This is a good combination for marriage as the duo believe very much in matrimonial bonds. The longevity of this marital combination is fairly long enough. Though troubles might arise the duo make sure that they stick together, they just fake their feelings and hang on to each other. Mutual tasks like family-grooming, financial savings, etc binds them together. With time, the Libra guy slowly gets the harness of the Leo woman under his control. This brings in a sort of better compatibility in the marriage.

Sex would be compatible between a Leo woman and a Libra man. It would have an aesthetic appeal to the duo. Both do not venture into unknown territory when having sex. Also not much passion can be seen involved. Usually sex would be had as a means for having progeny and nothing less. Fun and romance are unlikely in this area for this pair.

When it is the end of the road for this couple, the dark side of the Libra guy would be visible. He likes to play with relationships and hence makes sure that he plays his last card. Generally the Leo woman would be caught unawares. She better make sure that she has a strong footing when separation and sharing of mutual resources comes to the fore.