The Leo man and the Virgo woman share greater compatibility in life. The Virgo girl with her perfectionist trait would work her best to make her home the best place on earth. She yearns for appreciation from the Leo guy who takes her work for granted. If the Virgo woman stays away from criticizing him and he in turn does not demand too much from her then there would be goodness in this combination.
The Leo man is the only one who has the real guts to enter the domain of the Virgo female. She would be a perfect girl to his dominance as well. 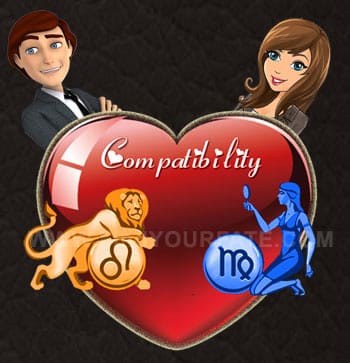 The Leo man and the Virgo woman share much compatibility in romance and passion.

The Leo man with his sensuous nature caps it all. Though the Virgo girl is not explicitly romantic she can be wooed down by the Leo guy easily. Their romantic moves would be one among the best of the zodiacs.

The compatibility for friendship would be just good between a Leo man and a Virgo woman. Both being interested in hard work they can adjust and understand each other perfectly when being friends. They share mutual interests in work and play. Also only a Virgo girl can harness the Leo guy by her wits and acts.

The Leo man and the Virgo woman make a compatible marriage. This is one of the best combination for marriage as both are committed, loyal and are ruled by feelings of the partner. This is one relationship that would last long. Usually the Leo man takes control of the relationship. Theirs would be a traditional marital life including family and friends into the relationships.

Generally this relationship stays till the end of the days that an end is ruled out. But then if fate would have it then it would be the Leo man who would call it off. Though he would be grief-stricken he makes sure that their end is amicably settled. Even after a long time if the Virgo girl wants help she can readily approach her lion king with total ease.