This combination of a Leo man and a Libra woman makes a compatible relationship. Both are extroverts, love adventure and limelight that they get along well together. Both are known to relish artistic pursuits with ease. There would be much love and romance with this pair and the chemistry between them is difficult to fathom. But then the Leo guy wants to dominate the scene which would not go well with the Libra
girl.The Leo man would be impulsive while the Libra woman would be highly indecisive. Hence there would be some moments of incompatibility with this duo at times. 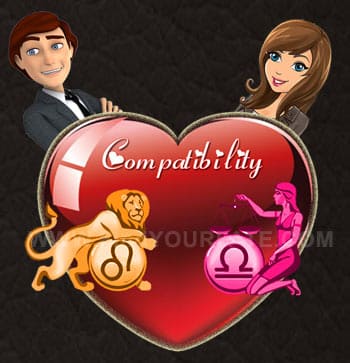 The Leo man and the Libra woman do not make good friends in life. Generally Libras develop comradeship in a calculated and business-like way which would not be conducive for a serious friendly relationship. Also the Leo guy is not more bent on making friends, he needs a romantic companion for life. Hence friendship is ruled out for this pair.

There would be better compatibility between a Leo man and a Libra woman during the initial periods after marriage. But with time the relationship wears off as there would be nothing in common to hold them together. The Leo guy is conventional while the Libra girl wants to keep up with the present day technology. Hence there would be frequent rifts due to this. Though they might find the beginning of their relationship happy, they do not up the hard work needed for maintaining a marriage. Both need to understand that life is more than what you see explicitly in others around you.

The Leo male and the Libra female are very comfortable and compatible in their sexual life. They take it as a fun part of their life and give their best shot. There would be much romance, foreplays, new tricks involved. There would be no inhibitions between this pair when it comes to sex. Sex would be one thing that this duo enjoy having together for long without any altercations.

For this pair the end does not come immediately. It would take a long time for both to realize that they are not meant to be in the relationship at all. But when the end comes it would be a mutual decision and there would not be any hurt feelings. Both would have the satisfaction that they did their respective roles well. The duo are said to be better off with each other away from the relationship than when they were together. This is one relationship where marriage usually results in a sure debacle