A Leo man and a Leo woman are not much compatible in life. The reason being both like to hog the limelight. Each one tries to dominate the other and hence there would be a clash of egos. Each needs more attention than the other and they cannot stand being over-run by the other in life. If one of them tries to climb down, then there would be goodness else this relationship is in for serious trouble. 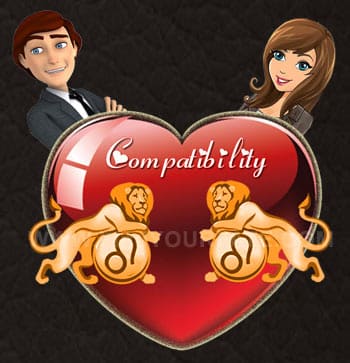 Leos. The world if not their bedroom would be a stage for them to showcase their romance. Passion is also found here with this duo but then the Leos love by their heads and not by their hearts. Spontaneous show of romance and love would not be found here.

The Leo guy and the girl do not have much compatibility for friendship to thrive within themselves. Though they are warm and kind-hearted there would be much selfish interests with both that friendship is impossible. They take love and romance more seriously than friendship too.

The Leo man and the woman share greater compatibility when it means marriage. Their loyalty and the love for good things in life brings about a sense of goodness at home. The children of this duo would be doubly blessed. Straying is unheard of here with this pair as they stick to orthodox traditions and customs. Leos believe in the institution of marriage and hence are most likely to stay together for life come what may. Some conventional and orthodox rules would be followed by both that keeps the marriage intact for years.

The duo share better compatibility in sex as well. It would be more of a performance that both play their parts in a meticulous manner. There would be much romance . Each finds the other adorable that sex would be much satisfying and completes the picture. But then the Leo woman need to play a subdued role here else there would be trouble.

When it is the end of the relationship, then it would be like a pair of wounded lions on the prowl. They keep talking about his or her contribution to the relationship at large. Though both would have put their heart and soul into it things somewhat do not work as to how it ought to be. Mutual disappointment and dissatisfaction would be the name of the game when the game ends for this pair.