The Leo man and a Capricorn woman share a compatible relationship together. But then both need to invest a lot in the relationship to make this happen. The Capricorn girl does not like the extravagant lifestyle of the Leo, he in turn needs constant admiration from the Cap girl, which is not going to happen in the near future. If they are ready to compromise and there is better understanding then there would be goodness.
Both come from a higher breed and hence they get along easily. Both need admiration and adulation from outside and so make all efforts together to win the hearts of those around. Both the Leo and Capricorn want the best things in life and so have a common agenda to pursue. The duo like to socialize and are hard-workers and hence life would be a lot more compatible for this pair than many other combinations in the zodiac. 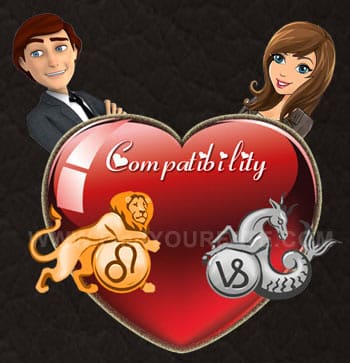 The Leo guy and the Capricorn girl share greater compatibility when it comes to romance and passion in life. But then the Leo man cannot take the Cap girl for granted with his extravagant gifts.

With time the passion between this pair gains momentum. This would be a perfect mixture of emotions and a very beautiful relationship to hang onto.

The Leo male and the Capricorn female make great friends in life. Both are loyal and have much warmth to pursue the relationship in positive territory. Both of them care a lot about the other. They also share mutual interests and hence comradeship would be a great relationship for this pair.

The Leo male and the Capricorn female make a very compatible marriage. This is because both of them have great values and believe in marriage. Leo usually takes the lead in the marital life. Both of them are conservative and hence stick to age-old customs and traditions followed by the household. The Cap girl would be satisfied with the marriage if she is bestowed with all material resources needed for life.

Though sex would be a compatible affair with this duo, both are much reserved in this area. There would be some inhibitions from both the parties. There would be no public display of affection and physical intimacy. But after every encounter, their bonding gets stronger enough.

Usually it would be the Leo guy who would initiate the separation when the end is imminent. His pride and ego would be hurt to a certain extent. The Cap girl remains unnoticed and a third party would be usually called in for negotiations .