Between a Cancer and a Leo there would be much compatibility. But when the Cancer happens to be the guy and Leo, the girl then things would not be that rosy. Some adjustments can work wonders then. The Leo woman should make sure that she does not dominate. The Cancer man just showers love and affection on the Leo girl without fail. This is one of the best pairs in the zodiacs.
They just bring out the best in each other to the fore that life would be all fun and happiness for the duo. 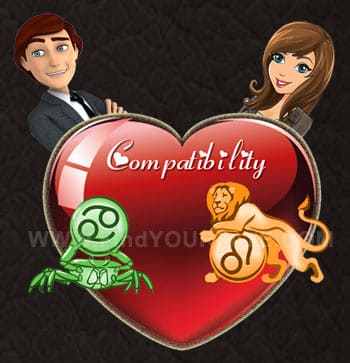 The Cancer woman and the Leo man share greater compatibility in romance and passion. This is one ideal pair ever to be found on the planet. They relate to each other very beautifully. They share passionate moments together in public and in private without much hiccups.

There would be much compatibility when a Cancer man and a Leo woman are friends in life. They make the best friends among the zodiacs. They love each other, spend time together, share secrets and play along like little children with innocence and no strings attached.

Compatibility in marriage would be the ideal one between a Cancer man and a Leo woman. The Cancer guy fulfils the needs and desires of the Leo girl that life would be bliss here. Together they carefully move on the marital trail. The Cancer man does most of the background works that the Leo girl just has to follow him suit.

Sex would be greatly compatible and satisfied when a Cancer guy and a Leo girl are involved. The sensuous feelings and emotions come from the heart for the duo. Intimacy would be at the crest with this pair. Each one tries his or her best to satisfy the partner. Trust and mutual loyalty plays a major role here with this duo.

This is one combination that is a package of true love that the end does not come that easily. But if it had to then it should be the initiation of the Leo only. The Cancer guy would then take it gracefully. Later on if the Leo woman wants help in any form she can very well turn onto her previous Cancer partner to set her right. Such would be the loyalty of the Cancer fellow.