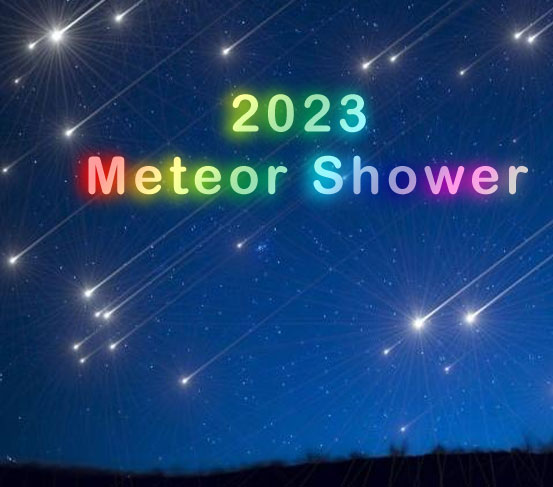 Quadrantids 2023: The Quadrantids are an easily visible January meteor shower. The entire activity period of the Quadrantids runs from January 1 to 5, 2023. The radiant of this shower is an area inside the constellation Bootes.

Peak of Quadrantid meteor shower: The maximum of the Quadrantid activity in 2023 is expected during the night of the 3rd January 2023. The Quadrantids are an easily visible January meteor shower. The peak intensity is exceedingly sharp: the meteor rates exceed one-half of their highest value for only about 8 hours .

Perseids 2023: From July 17 to August 24 in 2023 the Perseids light up the night sky. That is the name of a popular meteor shower which comes back every year during the first half of August. The peak of the Perseids is on August 12. At that night one can see extra high amount of shooting stars.

Peak of Perseid meteor shower: The maximum of the Perseid activity in 2023 is expected during the night of the 12th August 2023. The Perseids is the name of a prolific meteor shower. The shower is visible from mid-July each year, with the peak in activity being between August 9 and 14, depending on the particular location of the stream.

Leonids 2023: The Leonids are a meteor shower associated with the comet Tempel-Tuttle, which is visible between the 14th and 21st of November 2023. The Leonids get their name from the location of their radiant in the constellation Leo: the meteors appear to radiate from that point in the sky. The Leonids tend to peak in November.