The Moon is a heavenly body being related to feminine beauty, legend, myth and romance. If you are interested in the Moon then you have valuable information related to the Moon over here. This is a complete list of all Moon phases dates in 2016 along with the timings. This would be very useful for any sky-watching enthusiast.

You can use this Moon phase calendar to familiarize yourself with the changing phases of the Moon. It would be handy for you to select nights for viewing the Moon through the year and also for planning important events in your life.

The Sun always illuminates the half of the Moon facing the Sun. When the sun and moon are on opposite sides of the earth, the moon appears "full" to us, as a bright, round ball. When the moon is in between the earth and the sun, it appears dark, and we call it a New moon. In between, the moon's illuminated surface appears to grow or wax to full, and then decreases or wanes to the next new moon. 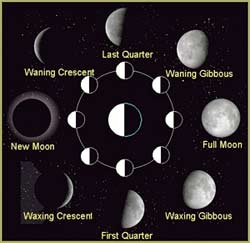 The four major moon phases of "New Moon" , "1st Quarter" , "Full Moon " and "Last or 3rd Quarter" are listed for all the months of 2016. These phases have to do with the relative positions of the Sun and the Moon . As the moon circles the Earth, the shape of the moon appears to change because different amounts of the illuminated part of the moon are facing us.

New Moon:During new moon the moon would be between the earth and the sun. It is the exact time when the moon goes from waning to waxing.

This is a time of birth or spring of new life. Hence it is an apt time for you to start any new venture. But it would be a risky situation as you would not be loaded with much information related to the job at hand. Do not make any commitments a t this time because you do not know the outcome. New moon is a good time to make wishes and ideals in life.

First Quarter:This is the phase of the moon when it is perpendicular on the distance from the earth to the Moon. This is the first time after the new moon.

This would be a time for building. Things gain speed or momentum during this phase of the Moon. This is a time for action and not thinking. Conflicts in interests are likely during the first quarter of the Moon which need to be sorted out then and there.

Full Moon:This is the time when the Moon goes from waxing to waning. The Moon would be fully illuminated and the earth would lie between the Sun and the Moon.

Full Moon is the time when your efforts start to bear fruit. This is a good time to open up your information or creativity to the world. All your efforts culminate now.

Last Quarter:This is the time when the Moon is perpendicular on the distance from the earth to the Moon.

This is a time to review your works. An apt time to bring your works to a close. Not a good time to start anything new.