The name derives from the white tone to the leaves. The botanical name of the Willow 'Salix' comes from the Celtic word 'sal' - meaning near, and "lis" - meaning water The bark of the tree has a long history of use in medicine. It led to the discovery of aspirin, which is a chemical similar to salicin, found in willow bark. The second Latin name refers to the white colour of the tree, due to the pubescence of the leaves and is also called as Duck Willow. In China, its medicinal properties have been appreciated for centuries. 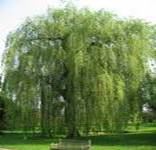 But not until the eighteenth century was the herb recognized as a pain reliever and fever reducer in the West. European settlers brought the white willow tree to North America, where they discovered local tribes were using native willow species to alleviate pain and fight fevers. In 1828 the plant's active ingredient, salicin, was isolated by German and French scientists, and ten years later, European chemist manufactured salicylic acid, a chemical cousin to aspirin, from it. The most important uses of willow today are energy forestry and environmental forestry.

Salix alba (White Willow) is a species of Willow native to Europe and western and central Asia. The White Willow is less lofty than the Crack Willow, with a stouter stem and the branches ascending, but tapering and spreading, the twigs olive-coloured, silky, and hard. The bark is fissured. The leaves are long, lance-shaped, finely toothed, bluish below, downy or silky both sides, and glandular.

The leaves are arranged in spiral whorls. The stipules, or leaflike organs, are egg-shaped, and fall. The lowest teeth are glandular. The flowers are in slender lax catkins, with hairy stamens and deeply-cloven stigmas. The capsule is sessile. The scales of the catkins are linear, and not as long as the stamens. The plant is dioecious and is in bloom from April through May. It is a deciduous tree propagated by seeds. The seeds are fringed with white silky hairs, and are thus blown to a distance by aid of the wind. The hairs help to fasten the seed also when it has come to rest on the ground.

Willow tree is a native of Europe and Western and Central Asia. It is widely distributed in the Northern Temperate Zone in Europe, North Africa, North and Western Asia and North West India.

White willow is generally seen by streams and rivers, marshes, woods and wet fens on richer soils. The tree best thrives in humid areas like riverbanks and can be grown from partially matured cuttings during the summer or from hard wood cuttings during the winter. It cannot grow in the shade. It requires moist or wet soil. The plant can tolerate maritime exposure.

To grow willow from unrooted cuttings or whips, the willow should be cut and planted after leaf fall and before leaf bud - that would usually mean during December, January and February.Unrooted willow cuttings and whips should ideally be 'planted' immediately upon receipt, however, if this is not possible, store them upright in a few inches of water in a cool, dark airy frost-free location or heel in in some moist soil/peat. If they are stored so long in water that roots start to form then it is advisable to cut off that section as such roots are quite fragile and may be damaged when planted out. An ideal soil would be a good moist loamy one, but Willow will do well in most soil conditions.

Whips for living willow structures and fedges should be pushed about 6 to 9 inches into the ground. Planting distances depend on the vigorousness of the variety and the density required but we would recommend that cuttings for hedges be planted 18" to 36 "apart. Weeds must be controlled for the first year or so and the willow must be kept well-watered. After the first year's growth the willow should be cut (ie during December to February) to ensure more/dense growth in the next year. If you wish to retain a screen or windbreak you could just cut half of the stems. Cutting each year ensures growth of good straight rods and, of course, if you are growing for winter colour, then stem colour is best on one year old growth.

The flowers of the willow tree are in bloom from April through May.

Water mark disease symptoms can be seen in mid to late spring. The leaves will turn reddish and wither, thus the affected areas of the tree will slowly deteriorate and die. It is also affected by willow gall and willow leaf bettle.

The bark and the leaves of the willow tree are the most commonly used parts for its commercial and medicinal purposes.

• Relieves acute and chronic pains, including back and neck pain, headaches, and muscle aches.

• White willow bark can be very effective for relieving headaches, as well as acute muscle aches and pains.

• An infusion of the leaves has a calming effect and is helpful in the treatment of nervous insomnia.

• White willow bark is often used as a natural alternative to aspirin.

• Decoctions of willow bark tea can be used as a gargle to treat inflamed gums.

• It is employed to reduce fever.

• Willow is one of the most common uses in dietary supplements is as an adjunct for weight loss.

• It may help ease the pain of menstrual cramps.

• The wood is also used to make charcoal.

• The pulp of the willow tree is also used in the manufacturing of paper.

• The young stem of the willow tree is also used in basket making.

• The leaves can be used as a tea substitute.

• The inner bark can be dried and powdered and used in making of bread.

The willow is a famous subject in many East Asian nations' cultures particularly painting (pen and ink) in china and Japan. In English folklore, a willow tree is believed to be quite sinister, capable of uprooting itself and stalking travellers. Hans Christian Andersen wrote a story called Under the Willow Tree (1853) in which children ask questions of a tree they call 'willow-father', paired with another entity called 'elder-mother'. Green Willow is a Japanese ghost story in which a young samurai falls in love with a woman called Green Willow who has a close spiritual connection with a willow tree.

The Willow Wife is another, not dissimilar tale. Wisdom of the Willow Tree is an Osage Nation story in which a young man seeks answers from a Willow tree, addressing the tree in conversation as 'Grandfather'. The Willows connection with water links it directly with the moon goddess who is revered by contemporary witches and pagans alike. One old tradition concerning the Willow is still celebrated today by Rumanian Gypsies. This is the festival of Green George which takes place on the 23rd of April.

A man wearing a wicker frame made from the Willow represents the character of Green George which is then covered in greenery and vegetation from the land. This is symbolic of the Willows association with water that fertilizes the land bringing fruitfulness to the fields. On the eve of the festival and in a gay and lively manner, everything is prepared in readiness. A young Willow tree is cut down and re-erected at the place of the festivities, there it is dressed and adorned with garlands.

In Athens it was an ancient custom of the priests of Asclepius to place Willow branches in the beds of infertile women, this in the belief that it would draw the mystical serpents from the Underworld and cure them, the connection being the phallic symbolism of the snake form itself. However in later times this was turned around, and the Willow became protective of snakes by driving them away. There is a darker side to the Willow however, for it is also associated with grief and death. The Greek sorceress Circe is said to have had a riverside cemetery planted with Willow trees dedicated to Hecate and her moon magic.

Here male corpses were wrapped in un-tanned ox-hides and left exposed in the tops of the trees for the elements to claim and the birds to eat. From this association with grief and death came the practice of placing Willow branches in the coffins of the departed, and the planting of young saplings on their graves. Old folklore advises that to plant a young Willow and watch it grow would ease the passage of your soul at death. The ancient Celts believed that the spirit of the dead would rise up into the sapling planted above, which would grow and retain the essence of the departed one. Throughout Britain many cemeteries, particularly those situated near rivers, lakes or marshes are often to be found lined with Willow trees to protect the spirits in place.