The generic name is derived from the Greek 'santalon' meaning 'sandalwood', and the species name from the Latin 'albus' meaning 'white', in allusion to the bark. The Sandalwood is used in aromatic, religious and medicinal purposes. Sandalwood is an aromatic tree that is a member of the numerous freeloading plants in the Santalaceae family, particularly the Santalum album. 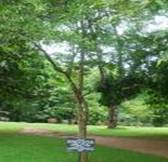 The vital oil extracted from the sandalwood tree is commercially utilized in fragrances and remedies. According to the experts as well as the traders, sandalwood grown in the Mysore region of Tamil Nadu in southern India is of the best quality available anywhere. Currently people in Kununurra in Western Australia are growing the Indian sandalwood species or the Santalum album on a very large scale. Slow growth, lack of superior genetic material and the time lag until harvestable amounts of heartwood are formed are deterrents to wider cultivation.

Santalum album is a small evergreen tree that grows to 4 m and can grow to a height of 20 m; girth of up to 2.4 m, with slender drooping branchlets. Bark is tight, dark brown, reddish, dark grey or nearly black, smooth in young trees, rough with deep vertical cracks in older trees, red inside. Leaves thin, usually opposite, ovate or ovate elliptical, 3-8 x 3-5 cm, glabrous and shining green above, glaucous and slightly paler beneath; tip rounded or pointed; stalk grooved, 5-15 cm long; venation noticeably reticulate. Flowers purplish-brown, small, straw coloured, reddish, green or violet, about 4-6 mm long, up to 6 in small terminal or axillary clusters, unscented in axillary or terminal, paniculate cymes.

Fruit a globose, fleshy drupe; red, purple to black when ripe, about 1 cm in diameter, with hard ribbed endocarp and crowned with a scar, almost stalkless, smooth, single seeded.

Santalum album is a parasitic, evergreen tree growing primarily in South Central India, in the dry forests of the Deccan plateau, which rolls through the states of Tamil Nadu and Karnataka. The Sandalwood genus can be found around the world including Indonesia, Australia, (S. rubrum,) the South Pacific (S. austrocaledonicum,) and even Chile, Hawaii and the Ogawara Islands of Japan.

The tree can grow under a variety of environmental conditions; the finest heartwood is formed only in dry, rocky and hilly terrain. It is seen growing in open grass land with patches of trees on the edges of the forest, and also in hedge-rows and bushes on the boundaries of fields and near villages.

Planting should therefore be avoided in wet land. A rather heavy rainfall, say 50 inches, will not hurt the tree, provided that the soil is porous enough to carry off the surplus water before stagnation sets in. The roots and bark are very sensitive to injury and the tree is easily killed by fire. It is reproductive from seed, but rarely grows thickly, single specimens attaining maturity at intervals of 10 to 100 yds. If seedlings are crowded, they seldom attain a good size, so that judicious thinning in the early stages of growth becomes an important factor in the cultivation of sandal. One of best means of propagating sandal is to prepare small cultivated plots about one foot square, beneath bamboos or prickly shrubs, and to sow 8 or 9 seeds in each plot at the proper season.

The shrub affords protection both from direct sunlight (which is harmful when the sandal plant is young), and from animals. The system of planting may be by pitting or by sowing in patches, according to the nature of the ground and locality. The whole plot should be dug up to a depth of not less than 12 inches, the soil being turned up two or three times, and all weeds, roots and grass, etc, should be entirely removed. The soil should be reduced to a fine mould and properly levelled, after which beds 2 1/2 to 3 ft. wide should be formed for watering and removing seedlings with convenience. The seeds should be sown in March to April, and covered with fine oils of about 3/4 in. in thickness. Watering once a day should be resorted to, so as to keep the soil moist till germination takes place.

The straw-coloured flowers which later turns into a deep purple are in bloom from March to April but however in Australia flowers appear in December to January.

Spike disease that shortens the internodes, reduces the leaf size, kills haustoria, blocks vascular tissue and eventually kills trees, is a serious pathogen in India. Nursery pests include pathogenic fungi, Fusarium and Phytophthora and nematodes. A wide range of insect pests is reported on this species in India.

The wood, leaves and the essential oil are the most commonly used parts of the sandalwood tree for its commercial and medicinal purposes.

• The oil is used in the treatment of bronchial catarrh.

• Sandalwood is recognized as having a pronounced effect on the genito-urinary tract and therefore is useful in urinary tract infections including cystitis and gonorrhea.

• Sandalwood is used in Ayurveda for treating skin conditions such as acne, poisonous stings and external bleeding; in massage oils and as a blood purifier.

• The bark is boiled for a cough syrup and used the seed kernels in a liniment for muscular stiffness.

• It is an outstanding aphrodisiac, equally useful in cases of frigidity and impotence.

• Sandalwood is also considered to be a digestive aid which can help alleviate heartburn, nausea, diarrhea and vomiting.

• Due to its moisturizing properties it acts as an astringent and antiseptic.

• Sandalwood is also soothing for cracked, chapped and irritated skin.

• It is also recommended for mature and tired skin as well as stretch marks and scars.

• The wood is popular for wood carving, and is the source of sandal oil.

• The oil is valued for perfumery and incense.

• Sandalwood's low toxicity level is an appropriate oil to use topically, in the bath, or as an inhalant.

• Sandalwood is calming and useful as an aid to meditation.

According to the astro reports the sandalwood tree is governed by the celestial body Pluto.
Cultural Significance

Sandalwood has been used in India as temple incense to worship the gods since antiquity, and sandalwood paste is also used in spiritual and ritualistic practises. Disciples of the Tantra tradition smear sandalwood onto their body while celebrating the divinity of sexual ecstasy. Sandalwood is mentioned in the Hindu love scripture the 'Kama Sutra.' It runs like a common thread throughout many of the world's major religions: in Buddhism, Hinduism and Islam, sandalwood forms the heart of their aromatic aspects, helping to realize and bring the divine within. Sandalwood is also used in death rituals, especially in India. Ideally, one is immolated on a pyre of pure sandalwood and the ashes cast into the Holy Ganges, the Mother of India.

Both the Indians and the Egyptians used sandalwood in cosmetics to preserve the youth and beauty of women. Burmese women sprinkle people in the street on the last day of the year with a mixture of rosewater and sandalwood oil to wash away the sins of the year. Queen Elizabeth I liked her bed linen to be perfumed with sandalwood. Sandalwood is aided in the conjuring of spirits forth from the Otherworld. It was also said to help soothe those who felt bitter or jealous. Pregnant women would lay cloths beneath the tree in order to catch the leaves, which were believed to assure an easy birthing process. In older days, this oil was used for perfume purpose only and the use was limited to Royal families.