The other common name for peach is Nectarine which is a cultivar group.

The scientific name persica, along with the word "peach" itself and its cognates in many European languages, derives from an early European belief that peaches were native to Persia (now Iran). The modern botanical consensus is that they originate in China, and were introduced to Persia and the Mediterranean region along the Silk Road before Christian times. Historians believe that peach trees were first introduced into the colonial settlements of the United States by the French explorers in 1562.The peach trees were planted from peach seed imported from Europe in an effort to establish a self sustaining, agricultural. 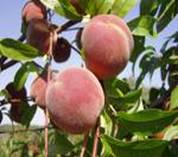 fruit tree product to feed the colonists. The Peach is included by Hooker and other botanists in the genus prurnus, its resemblance to the plum being obvious. Others have classed it with the Almond as a distinct genus, Amygdalus, and others again have considered it sufficiently distinct to constitute it a separate genus, persica.When first introduced it was called Malus persica, or Persian Apple. The expedition of Alexander probably made it known to Theophrastus, 392 B.C., who speaks of it as a Persian fruit. Today, peaches are the second largest commercial fruit crop in the States, second only to apples.

The peach tree grows into a handsome canopy of dark-green rich foliage to a height of 6 to 10 feet. The bark is dark grey, initially smooth with elongated lenticels, later splits and becomes irregularly scaly. Twigs are red and green, later turns grey-brown, buds are blunt and grey fuzzy, spur shoots present.

The leaves are lance-shaped, about 4 inches long and 1 1/2 inch broad, tapering to a sharp point, borne on long, slender, relatively unbranched shoots, and with the flowers arranged singly, or in groups of two or more at intervals along the shoots of the previous year's growth. The blossoms come out before the leaves are fully expanded, and are of a delicate, pink colour.

They have a hollow tube at the base, bearing at its free edge five sepals, and an equal number of petals, usually concave, and a great number of stamens. They have very little odour. The fruit is a drupe, like the plum, having a delicate, thin outer downy skin enclosing the flesh of the Peach, the inner layers becoming woody to form the large, furrowed, rugged stone, while the ovule ripens into the kernel or seed. This is exactly the structure of the plum and apricot, and differs from that of the almond, which is identical in the first instance, only in that the fleshy part of the latter eventually becomes dry and leathery, and cracks along a line called the suture, which is merely represented in the Peach by a furrow on one side.

Peach Trees originate from China and now thrive on a commercial basis in Mediterranean areas. They do best in a sheltered sunny site in the UK.Prunus persica, or the common peach tree, can be grown in the Southeast, Mid-Atlantic, some areas of the Midwest, Great Lakes, California and dry summer areas of the Northwest and Intermountain West.

The peach is the most adaptable of all fruit trees for home gardens. When planting, they should be spaced to allow a spread of 20 to 25 feet. At 3 or 4 years of age they begin to bear large crops and reach peak productivity at 8 to 12 years. Peaches need clear, hot weather during their growing season and require well-drained soil as well as a regular fertilizing program. They also require heavier pruning than any other fruit trees to maintain size and encourage new growth. Most peach varieties are self fertile, not requiring a second tree. Cannot tolerate extreme winter cold or late frost. A lot of summer heat is required to mature the crop, with mean temperatures of the hottest month between 20°C and 30 °C. Another problematic issue in many peach-growing areas is spring frost. The trees tend to flower fairly early in spring. The flowers can often be damaged or killed by freezes; typically, if temperatures drop below about -4 °C, most flowers will be killed. However, if the flowers are not fully open, they can tolerate a couple of degrees colder.

The flowers are pink to lavender, 1 inch across, solitary but often close together, appearing in early spring.

The peach tree is commonly affected by pests like aphids, powdery mildew, caterpillar, leaf spots and scale insects. Aphids are small, soft-bodied, slow-moving insects that suck fluids from plants. They can transmit harmful plant viruses with their piercing/sucking mouthparts. Aphids, generally, are merely a nuisance, since it takes many of them to cause serious plant damage. Powdery Mildew is usually found on plants that do not have enough air circulation or adequate light. The powdery white or grey fungus is usually found on the upper surface of leaves or fruit. Leaves will often turn yellow or brown, curl up, and drop off. Leaf spots are caused by fungi or bacteria. Brown or black spots and patches may be either ragged or circular, with a water soaked or yellow-edged appearance. Insects, rain, dirty garden tools, or even people can help its spread. Scales are insects, related to mealy bugs that can be a problem on a wide variety of plants - indoor and outdoor. Blights are cause by fungi or bacteria that kill plant tissue. Symptoms often show up as the rapid spotting or wilting of foliage. The fruit is very susceptible to brown rot.

The bark, leaves and the fruits are the most commonly used parts of the peach tree for its commercial and medicinal purposes.

• The peach tree acts as a demulcent, sedative, diuretic and expectorant.

• It is used in removing warts.

• It is also used in whooping cough, ordinary coughs and chronic bronchitis.

• The leaves are used for treating irritation and congestion of the gastric surfaces.

• It is good for hoarseness, loss of voice and helps defects of the lungs, vomiting and spitting of blood.

• The syrup was considered good for children and those in weak health, and to be good against jaundice.

• A tincture made from the flowers has been said to allay the pain of colic caused by gravel.

• The fresh leaves were stated by the older herbalists to possess the power of expelling worms, if applied outwardly to the body as a poultice.

• At times of injury the juice from the leaves helps in clotting of blood.

• It is also good for cystitis and tenderness of the bladder, because it stimulates the urine flow but is soothing.

• The Peach is chiefly used for feeding pigs, and for making Peach Brandy.

• Flowers can be used raw or cooked and also added to salads or used as a garnish.

• The leaves can also be brewed into a tea.

• The gum obtained from the stem can be used for chewing.

The astro reports for the peach tree say that the tree is strongly influenced by the Venus planet.
Folklores and Myths

In China, pink or white skinned Peaches are a symbol of eternal life, and often appear in religious iconography depicted on statues or prints. The Peaches of Immortality grow in the garden of a goddess called the Queen Mother of the West. The Star God Shu -- the God of Long Life -- carries a Peach that grants longevity to human beings. In America, some root workers dry peach tree leaves and crumble them into King Solomon Wisdom Oil or Crown of Success, or Oil to help students pass tests; adding Verbena and Sage is said to strengthen the results.

According to the Chinese mythology the peach tree grows in a convoluted tangle against the sky barrier it cannot pierce. In common with other world tree myths, the peach tree creates a passage to the sky beyond the human world, and it carries at its crest celestial gates presided over by two punitive gods, Holy Shu and Yu Lu.Due to its delicious taste and soft texture, in ancient China "peach" was also a slang word for "young bride", and it has remained in many cultures as a way to define young women or a general state of goodness.

The Peach is mentioned in the books of Confucius, fifth century before the Christian era, and the antiquity of the knowledge of the fruit in China is further proved by representations of it in sculpture and on porcelain. In Italy, at the present day, there is a popular belief that if fresh Peach leaves are applied to warts and then buried; the warts will fall off by the time the buried leaves have decayed.