The genus is named after French botanist Pierre Magnol, from Montpellier. In 1703 Charles Plumier (1646-1704) described a flowering tree from the island of Martinique in his Genera. He gave the species, known locally as 'Talauma', the genus name Magnolia, after Pierre Magnol. The English botanist William Sherard, who studied botany in Paris under Joseph Pitton de Tournefort, a pupil of Magnol, was most probably the first after Plumier to adopt the genus name Magnolia. These were the first works after Plumier's Genera that used the name Magnolia, this time for some species of flowering trees from temperate North America. 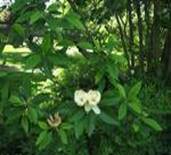 Carolus Linnaeus, who was familiar with Plumier's Genera, adopted the genus name Magnolia in 1735 in his first edition of Systema naturae, without a description but with a reference to Plumier's work. In 1753, he took up Plumier's Magnolia in the first edition of Species plantarum.Magnolia is an ancient genus. Having evolved before bees appeared, the flowers developed to encourage pollination by beetles. The flower's abundance in Mississippi is reflected in its state nickname, "Magnolia State". The magnolia is also the official state tree of Mississippi. One of the oldest nicknames for Houston, Texas Is "The Magnolia City" due to the abundance of Magnolias growing along Buffalo Bayou.

Magnolia virginiana is a medium sized tree which grows up to 27 meters tall with a diameter of around 1.2 meters. All its members are handsome, with luxuriant foliage and rich flowers which are white, pink, purple, green, or yellow. The flowers are followed by showy red or pink fruits displaying red, orange, or pink seeds, each of which hangs from the fruit by a thread-like strand.

The leaves of Magnolia acuminata are oval, about 6 inches long by 3 broad, and slightly hairy below, with a diameter of 6 inches, and the fruit or cone, about 3 inches long, resembles a small cucumber. The wood is finely grained, taking a brilliant polish, and in its colour resembles that of the tulip or poplar, but it is less durable. The bark of the young wood is curved or quilled, fissured outside, with occasional warts, and orange-brown in colour, being whitish and smooth within and the fracture short except for inner fibres. The older bark without the corky layer is brownish or whitish and fibrous. Drying and age cause the loss of its volatile, aromatic property.

Magnolia Virginian performs well in a wide range of soil conditions from wet to slightly dry. It is common in moist, acid soils close to wet places such as ponds, streams, and cutover lands. Although Magnolia virginiana is a swamp or bog tree, it will grow well in fertile, moist well drained soils. It is found mostly in full sunlight to partial shade elevation.

Magnolias grown from seed often vary in crown structure, size, vigour, and flower and foliage characteristics. Seed-grown plants usually take much longer to flower than asexually propagated plants. Magnolia fruits are 2 to 6 inches long and ripen in late summer to late fall. When mature, individual follicles in the fruit split to expose red or orange seeds. Fruits should be promptly harvested when seeds are mature. Alternatively, fruits with immature seeds may be ripened in a warm room. Seeds should be macerated in water to remove the red seed coat and fleshy pulp. Soaking macerated seeds in water for a few days may help in pulp removal. Freshly cleaned seeds may be sown right away but germination may be improved if seeds are stratified at 40°F for 2 to 4 months. Seeds may be stored for several years in sealed containers at 32 to 40°F.

Cutting propagation is preferred for most magnolias. However, rooting potential of cuttings varies considerably among cultivars as well as among species. Magnolia denudata, M. acuminata, and M. grandiflora are considered difficult to root from cuttings. Soft to semi-hardwood cuttings should be taken from juvenile plants whenever possible. Wounding may be beneficial. Cuttings should be treated with 5,000 to 10,000 ppm IBA and placed under intermittent mist. Cuttings usually root within 6 to 12 weeks. Layering is the ancient, traditional way of propagating magnolias. In its simplest form, branches are bent and pegged to the ground in late winter or early spring. A slit or cut is usually made in the buried portion of the stem. The terminal portion of the bent branch should be staked vertically. Magnolias may also be air-layered. Layered plants can be cut from the mother plant 1 to 2 years later.

Cream flower which is small, globular and very fragrant. The flowers extend two to three inches across and are found on the tree from early to late summer.

Magnolias are less susceptible to pests than many other ornamentals. Soft and armored scales are common in woods and landscapes and can occasionally damage plants. Magnolia root borer (Euzophera magnolia is) has caused problems in nurseries but is not a significant landscape problem. Several nematodes can infest magnolia roots. Wildlife eats the seeds and flower tepals.Several diseases affect magnolias, but none are serious. Stem cankers, powdery mildew and many different leaf spots are occasional problems. Root and wood rots occur as well as a verticillium wilt.

Bark of stem, leaves and the roots are the most commonly used parts of the magnolia tree for its commercial and medicinal purposes.

• Magnolia is a mild diaphoretic, tonic, and aromatic stimulant.

• It is used in rheumatism and malaria and is contra-indicated in inflammatory symptoms.

• Historically been used as a substitute for quinine in the treatment of malaria.

• At times the cones are steeped in spirits to make a tonic tincture.

• The bark, if chewed as a substitute for tobacco, is said to cure the habit.

• A warm infusion is laxative and sudorific, a cold one being antiperiodic and mildly tonic

• Magnolia virginiana is used in landscaping because of its form and its fragrant ivory flowers.

• An essential oil from the flowers has been used in the manufacture of perfumes.

• It can be used for furniture, paneling, veneer, pulp, tool handles, cabinet work, and for crates.

• The leaves are used as a condiment in cooking and are also used to make tea.

According to the astro reports the magnolia tree is under the dominion of the Jupiter planet.
Folklores and Myths

There is an affinity between the magnolia and the Wheel of Fortune card. This is one of those references which may have arisen at the turn of the last century. One may work with the extracted oil or even place a magnolia bloom in a bowl of water when meditating upon this card. Magnolia is widely reputed to enhance conjugal felicity and fidelity. The whole leaves are sewn into the mattress as a faithful marriage conjuration. Jealous wives who do not trust the beneficent power of magnolia have been known to add to the leaves a Mojo in which they conceal the so-called "nine-knot measure" of their husband's nature. This, they claim, will hoodoo his nature so he will be unable to perform for any other woman. The Tennessee musician Will Batts protested against this wicked custom in his song "Country Woman," recorded in Memphis in 1933.