Tamarind is the only important spice of African origin. Today, it is a much-valued food ingredient in many Asian or Latin American recipes. The sour and fruity taste of tamarind merges well with the heat of chiles and gives many South Indian dishes their hot and sour character, and their dark colour. The usefulness of the tamarind tree does not end with its fruit. Sometimes compared to the coconut as another "tree of life", it is widely adaptable and easily managed. 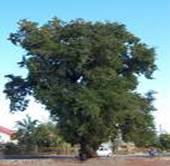 It produces many valued food, medicine, wood and construction products. The word Tamarind is from Arabic 'tamar-ul-Hind', meaning, "the date palm of India". It is commonly known in India as "imli", and in the Pacific as "tamirini".The specific name, "indica", also perpetuates the illusion of Indian origin. The fruit was well known to the ancient Egyptians and to the Greeks in the 4th Century B.C.The name "tamarind" with a qualifying adjective is often applied to other members of the family Leguminosae having somewhat similar foliage.

The tamarind is a large tropical tree with a short massive trunk, ferny pinnate leaves, small yellow flowers and fat reddish brown pods. The tree can get 90 ft tall but is usually less than 50 ft.It has a short, stocky trunk, drooping branches and a domed umbrella shaped crown about as wide as the tree's height. The leaves are about 10 in long with 10-18 pairs of 1 in oblong leaflets.

Tamarind drops its leaves in pronounced dry seasons; in climates without a dry season it stays evergreen. The flowers are about 1 in across, pale yellow with purple or red veins. They have five unequal lobes and borne in small drooping clusters. The velvety cinnamon brown pods are 2-6 in long, sausage shaped and constricted between the seeds. The pulp that surrounds the 8-10 seeds is both sweet and extremely sour.

The tree tolerates a great diversity of soil types, from deep alluvial soil to rocky land and porous, oolitic limestone. It withstands salt spray and can be planted fairly close to the seashore. The tamarind is highly adaptable to somewhat arid conditions and can withstand both high heat and periods of drought. Plant in deep, well-drained soil with some acidity. Water frequently when young, but less when mature. Trees like dry conditions during fruit development.

Nursery-grown trees are usually transplanted during the early rainy season. If kept until the second rainy season, the plants must be cut back and the taproot trimmed. Spacing may be 33 to 65 ft (10-20 m) between trees each way, depending on the fertility of the soil. With sufficient water and regular weeding, the seedlings will reach 2 ft (60 cm) the first year and 4 ft (120 cm) by the second year. In India there are extensive tamarind orchards producing 275,500 tons (250,000 MT) annually. In India, there may be a delay of 10 to 14 years before fruiting. The tree bears abundantly up to an age of 50-60 years or sometimes longer, then productivity declines, though it may live another 150 years.

Tamarinds may be left on the tree for as long as 6 months after maturity so that the moisture content will be reduced to 20% or lower. Fruits for immediate processing are often harvested by pulling the pod away from the stalk which is left with the long, longitudinal fibers attached. In India, harvesters may merely shake the branches to cause mature fruits to fall and they leave the remainder to fall naturally when ripe. Pickers are not allowed to knock the fruits off with poles as this would damage developing leaves and flowers. To keep the fruit intact for marketing fresh, the stalks must be clipped from the branches so as not to damage the shell. A mature tree may annually produce 330 to 500 lbs (150-225 kg) of fruits, of which the pulp may constitute 30 to 55%, the shells and fiber, 11 to 30 %, and the seeds, 33 to 40%.

Tamarind has pale yellow flowers whith red traces and are borne in drooping clusters which are in bloom from May through June.

The fruit pulp and the wood of tamarind tree are most commonly used parts for its commercial and medicinal purposes.

• The fruit is said to improve digestion, relieve gas, soothe sore throats, and act as a mild laxative.

• Tamarind has a delicious sweet-sour taste and is widely used as a tonic to improve appetite and digestion.

• In some countries, the bark is reported to be prescribed in asthma, amenorrhoea, and as a tonic and febrifuge.

• It is also used in the treatment of liver and bile disorders.

• A poultice of the fresh leaves is applied to swellings and boils, and for relieving pain, and that of the flowers in inflammatory affections of the conjunctiva.

• Tamarind is used in the tea to treat malarial fever.

• An infusion of the leaves is said to be cooling and useful in bilious fever.

• It is also employed in ayurvedic medicine.

• The fruit pulp may be used as a fixative with turmeric or annatto in dyeing and has served to coagulate rubber latex.

• On Java, Indonesia's most populous island, tamarind is taken as basis for spicy and sometimes sweet sauces used to marinade meat or soy bean cheese (tahu) before frying.

• The leaves are eaten by cattle and goats, and furnish fodder for silkworms.

• Tamarind leaves and flowers are useful as mordants in dyeing.

• It is commonly used for dressing homemade blankets.

• Tamarind leaves in boiling water are employed to bleach the leaves of the buri palm (Corypha elata Roxb.) to prepare them for hat-making.

• Other industrial uses include employment in color printing of textiles, paper sizing, leather treating, the manufacture of a structural plastic, glue for wood, and a stabilizer in bricks, a binder in sawdust briquettes, and a thickener in some explosives.

• The pods are fed to livestock, and the pulp within the pods is used to make beverages, curries, chutneys and sauces.

• Young stems and also slender roots of the tamarind tree are fashioned into walking-sticks.

• The wood is valued for fuel, especially for brick kilns, for it gives off an intense heat, and it also yields a charcoal for the manufacture of gun-powder.

According to the astro reports the Indian tree is under the dominion of the Jupiter planet.
Cultural and religious Significance

It is mentioned in Buddhist sources from 650 AD and in Indian Brahmasamhita scriptures written between 1200 and 200 BC.The tamarind tree is the official plant of Santa Clara, Cuba. Consequently it appears in the coat of arms of the city.

Few plants will survive beneath a tamarind tree and there is a superstition that it is harmful to sleep or to tie a horse beneath one, probably because of the corrosive effect that fallen leaves have on fabrics in damp weather. Some African tribes venerate the tamarind tree as sacred. To certain Burmese, the tree represents the dwelling-place of the rain god and some hold the belief that the tree raises the temperature in its immediate vicinity. Hindus may marry a tamarind tree to a mango tree before eating the fruits of the latter. In Nyasaland, tamarind bark soaked with corn is given to domestic fowl in the belief that, if they stray or are stolen, it will cause them to return home. In Malaya, a little tamarind and coconut milk is placed in the mouth of an infant at birth, and the bark and fruit are given to elephants to make them wise.