Hollies are members of the botanical Ilex family. The spinous leaves and blood-red berries of the former might well be taken by the Christian symbolist as a mystic foreshadowing of the Passion at the celebration of the Nativity, and the name of the tree, which originally referred mainly to its pointed leaves, may have suggested something holy. 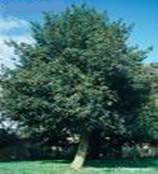 Thus with its bright red berries and shiny evergreen leaves, the native holly tree has been a symbol of midwinter festivals since pre-Christian times.Ilex,is the Latin name for Holm Oak; and aquifolium, alludes to the sharp-pointed leaf. In England during the winter, against the barren whiteness of our snow and frost, the Holly tree is an important native evergreen. Its glossy green leaves and clusters of red berries add a flash of colour to trees without leaves and is one of the most striking plants in the woodlands.

Holly is a tall tree or shrub, 10-40 feet high, with a single, upright, main stem, branched above, or with several stems growing out together from a common base. The bark is smooth, ashen-grey or black. The foliage is dense, dark, shiny, and smooth. The leaves are egg-shaped, acute, wavy, with prickly points below, losing them higher up the tree. The borders are cartilaginous. These spines are usually held to be a protection against browsing cattle, but are probably adaptations (as in the Cactus) to dry-soil conditions.

The flowers are in umbel-like cymes, many-flowered, on short stalks, which are in the axils. The flowers are white or cream colour. The sepals are egg-shaped, downy, 4-5-lobed, and do not fall. The corolla is wheel-shaped, with petals united below or distinct, inversely egg-shaped, hollow above. There are 4 stigmas which are stalk less, free or united. The 4 stamens are attached to the corolla with awl-like stalks and oblong anthers. The ovary is 4-6-celled. The drupe or berry is round, and contains a 4-5-celled stone or 4 stones. They are orange or scarlet when ripe. The seeds have a membranous outer coat. The flowers are small and often polygamous. The tree is compact, and often makes dense bushes. There is black, minute, leaf like organs, pointed, and functionless.

Holly tree is a native of Britain and grows throughout much of Europe, western and central Asia, and North Africa. Thus it is found in the Northern Temperate Zone in Europe from South Norway to Turkey and the Caucasus and Western Asia.

Found in most well-drained soils in scrub, hedges and woodland.

Holly (Ilex aquifolium) can tolerate either sun or shade. Although semi-shade is preferable in midsummer, the lighter it has the denser its foliage will be. Holly requires well-drained, slightly acid, fertile soil. English holly will grow to fifty feet or taller, so consider this when you are deciding where to plant your tree. They should not be planted in open areas where they may be exposed to cold winter winds or excessively hot summer sun. Plant your holly in early spring, before new growth begins and mulch with a 2- to 4-inch layer of wood chips, sawdust, pine needles, ground bark or other coarse material to keep the roots cool and moist. The root system resents being disturbed, so do not cultivate the soil around them. Hollies sometimes drop their old leaves due to transplant shock, but new foliage will soon emerge.

Be careful not to overwater holly that has lost its leaves. Keep the soil moist during the summer growing season, but allow it to dry somewhat in early fall to allow the season's growth to mature enough to resist winter damage. Feeding should be done in early spring or late autumn with a fertilizer formulated for acid-loving broad-leaved evergreens. (cottonseed meal, rhododendron fertilizer, Miracid, etc.) If pruning becomes necessary, do it in early spring before new growth begins, trimming towards a symmetrical shape.The male and female flowers of the holly tree are produced on separate plants. Therefore to ensure berry production, both male and female plants need to be planted. The male tree must be within 100 feet of a female tree of the same species in order for bees to successfully pollinate the female flowers and thereby produce the bright red berries that holly is know for.

The white flowers of the holly tree may be found between May and August.

The most common diseases affecting hollies are black spot, phytophthora leaf and twig blight, and sooty mold.Problematic insects include holly leaf miners, bud moths, and red mites. Birds love holly berries, but thankfully they prefer them after several freezes, which usually means they wait until late winter to eat them.

The leaves bark and the berries are the most commonly used parts of the tree for its commercial and medicinal applications.

• Holly infusions were used for pleurisy and smallpox, and to treat symptoms of rheumatism.

• The bark and leaves are good used as fomentations for broken bones.

• The juice of the fresh leaves has been successfully used in the treatment of jaundice.

• It is used in treating colic pains, as well as gout and fevers.

• They were powdered and used to check bleeding.

• The leaves of Holly have been employed in the Black Forest as a substitute for tea.

• The heartwood of mature trees is used for printing blocks, engravings, turnery etc

• The wood is used in making chess pieces.

• The roasted fruit has been used as a coffee substitute.

• It forms as an excellent hedge plant.

According to the astro reports the holly tree is under the dominion of the celestial body Saturn.
Cultural and Religious Significance

According to many different sources, holly is one of the sacred trees of the Druids, and may have actually been holly that Cesar had seen being harvested by Druids with gold sickles 5 days after the new moon of Yule. In Celtic Tree Magic by Elizabeth Pepper, she claims that along with the oak and ash, holly were favoured trees in the groves where Druids worshipped. She also makes a connection between the battle of Sir Gawain and the Green Knight with the battle of the Oak King and Holly King:'...the oak and the holly trees are two Divine Kings, one representing the waxing half of the year when the sun rises to its height at summer solstice, the other as symbol of the waning cycle as the sun retreats to its lowest point at midwinter solstice.

The Celtic myth of Sir Gawain and the Green Knight has the two opponents meeting in combat at midsummer and midwinter. The Green Knight's weapon is a bough of holly. By some it is thought that the custom of hanging boughs of holly to decorate homes at Christmas originated in ancient Rome where they would 'deck the halls' for Saturnalia. Holly has long been noted as an herb of protection; Pliny said, 'the branches of the tree defend houses from lightening and men from witchcraft.' Holly can also be planted around one's home to protect against being blasted (cursed).It is sometimes associated with divination. In Northern Europe, a charm was made to encourage dreams of one's future spouse. One would go out on a Friday at midnight and collect 9 holly leaves, and then tied with nine knots with a pure white 3-cornered handkerchief. Holly is considered sacred to the Dagda and the Goddesses Banba, Macha, and Danu.

Many popular superstitions still linger round the use of Holly at Christmas. In Rutland it is deemed unlucky to bring it into a house before Christmas Eve; in Derbyshire it is said that, according as the Holly brought into the house at this season be prickly or smooth, the husband or the wife will be master during the year. In some western counties the boughs removed from churches are treasured, like the palms at Passion-tide, for luck throughout the year following; and in Germany, like the tapers used at Candlemas, they are looked upon as a sure protection against thunder.

They were plucked late on a Friday by persons who keep silence from the time they go out till dawn next day, the leaves were collected in a three-cornered handkerchief, and nine were selected when brought home, tied with nine knots in the handkerchief, and placed under the pillow. Good dreams accompany the observance of this rite. According to an old tradition if a Holly stick is thrown at an animal, even without hitting it, it would return and lie down by it.