Fringe tree is small tree found in the eastern United States from Tennessee to Pennsylvania, bearing white flowers with fringe-like petals in June, giving the plant its name. It's easy to be a gardener in the spring because a never ending parade of plants awakens from their slumber and do their thing. 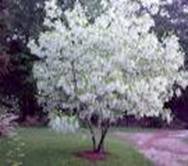 One of the finest of these spring bloomers is the fringe tree (Chionanthus virginicus), a small tree considered by many to be one of our most beautiful native plants. But, beautiful as it is, it remains uncommon in gardens. Fringe tree, also called Grancy Gray-beard and Old-man's beard, is native throughout the southeastern states but is nowhere abundant. In Arkansas, it occurs in all but the Delta region but is most commonly met in the Ouachitas and southern counties. It blooms as the dogwoods finish and after the trees have leafed out, so it's easy to miss in its wild habitat.

Fringetrees are small, deciduous trees or large shrubs with scaly winter buds. Bundle scars are in a circular pattern. Side buds are globular with four to five pairs of bud scales. Branches are spreading, stout, and somewhat smooth with gray to greenish brown bark. Leaves are opposite and large with entire leaf margins. Leaves are borne mostly near the upper ends of the twigs. Leaves are generally oblong in shape and 31/4-8 inches (81/2-20 cm) long. Foliage is dark green and shiny above and paler beneath. The leaves are leathery to the touch. Fringe trees are likely to be the last plant to leaf out in the spring and are long-lived trees.

Flowers are white and, when in full bloom, are strikingly attractive with drooping, fringed, or feathery blossoms. Flowers are dioecious and fragrant. Male flowers are said to be more attractive. The 4-8 inch (10-20 cm) long terminal panicles open in May or June as the foliage begins to emerge. Fruits are blue-black, single-seeded drupes and ripen in September on the female plants. The fringe tree has many stems, and is a wide and spreading plant. Coarse twigs and the branches bear the large oblong leaves. The fringe tree has a coarse appearance and morphology during the winter months, but the appearance of the tree is very different in the spring and the summer. From late May through early June, the tree is almost covered in a delicate cloud of fragrant white flowers that are borne on long panicles. Once the floral blooms start to fade late in the summer, the petals from the flowers on the tree begin to drop covering the ground beneath the tree like snow.

Fringe tree is a native of eastern United States and is widely distributed from from Delaware to Florida and Texas and south of New Jersey to Florida.

The fringe tree is a common site in moist thickets and along streams.Fringetrees is most common in Scioto County, along rugged ravines and the lower slopes of larger streams, woodland, sunny edge, dappled shade and shady edge.

For optimal growth, the fringe tree needs good loamy soils which are neutral to acidic. Trees also grow best at sites with a good exposure to sunlight. The fringe tree can grow very well in sites with partial shade but will normally not fruit so well at such sites. Seed are best sown as soon as it is ripe in a cold frame. Germination is usually good. Stored seed can be sown in February or March in a warm greenhouse according to one report but germination can them take 18 months at 15 - 20°c.Alternatively the stored seed can be pre-soaked for 2 - 3 hours in warm water and then given 3 months warm stratification followed by 3 months at 2 - 4°c.Germination can then be fairly rapid. Prick out the seedlings into individual pots when they are large enough to handle and grow them on in a greenhouse or cold frame. Plant them out into their permanent positions the following spring or early summer. Layering in early summer as soon as new growth is long enough and takes 15 months. Layering can also be carried out in spring or autumn

The white flowers, which from their drooping character give a fringelike appearance, are produced in May and June and are borne in dense clusters.

It is generally pest and diseases free. Occasionally mites will infest the foliage. Leaf spots can be caused by several genera of fungi. Most years, the leaf spots are not a problem and there is no cause for control. Powdery mildews of different genera may attack fringetree.Stem canker can cause premature defoliation.

The root bark and the dried barks are the most commonly used parts of the tree for its commercial and medicinal applications.

• The functioning of the spleen and the pancreas also appear to be strengthened by taking remedies made from the root bark of the fringe tree.

• Fringe tree bark was used in frontier medicine to treat gallbladder ailments and liver diseases of all kinds.

• It stimulates the appetite and increases gastric secretion.

• The remedies made from the fringe tree were used in the treatment of oral ulcers and spongy gums, as well as to treat various inflammations affecting the eye.

• The boiled bark extract was used to cleanse external wounds and other topical complaints.

• It is used in typhoid, intermittent, or bilious fevers, and externally, as a poultice, for inflammations or wounds.

• The sugar levels in the urine are lowered to a significant degree by the fringe tree bark remedy.

• Gallstones and jaundice are some of the problems which are usually treated using herbal remedies made from the fringe tree.

• With Saponin being a constituent of fringe tree it is used in the soap industry.

According to the astro reports the fringe tree is strongly governed by the celestial body Moon.
Folklores and Myths

The white colour flowers of the fringe tree are always associated with the Virgin Mary and considered as a symbol of purity. It can grow nearly anywhere in he continental United States and it's white flower colour kicks in just as the dogwood blooms are fading. Folklores say that this tree looks stunning, almost ethereal, when seen at peak bloom at night, illuminated by a full moon. And in the developed landscapes of your home, car headlights scanning around the edges of a driveway work just as well. Fringe tree is an apt moniker for this delightful small flowering tree, whose white blossoms do resemble a fanciful white fringe suspended in the spring sunlight."