The Balsam Fir was formally identified in 1768. Its scientific name, "balsamea", comes from the resinous blisters in the bark. Balsam Fir is the Provincial tree of New Brunswick. The balsam fir is one of the more important conifers of the Boreal Forest. The tree is one of America's most popular Christmas trees. 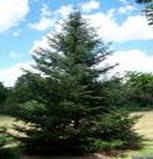 The fir tree has a long association with Christianity, it began in Germany almost 1,000 years ago when St Boniface, who converted the German people to Christianity, was said to have come across a group of pagans worshipping an oak tree. In anger, St Boniface is said to have cut down the oak tree and to his amazement a young fir tree sprung up from the roots of the oak tree. St Boniface took this as a sign of the Christian faith. But it was not until the 16th century that fir trees were brought indoors at Christmas time.

Needles 1-ranked particularly on lower branches to spiraled, curved upwards on branchlets exposed to full sun; cross section flat, grooved above, keeled below, shiny dark green above and grey-green below; stomata in 0-4 rows at midleaf above, these more numerous toward leaf apex, with (4-)6-7(-8) stomatal rows on each side of midrib below; base twisted; odour pinelike apex slightly notched to pointed; resin canals large, midway between abaxial and adaxial epidermal layers. Male cones 15mm long, at pollination red, purplish, bluish, greenish, or orange. Female cone resinous, sessile, apex round to obtuse, cylindric to broadly ovoid, blue-grey-green or purple turning grey-brown or violet-brown.

In the United States, the range of balsam fir extends from extreme northern Minnesota west of Lake-of-the-Woods southeast to Iowa; east to central Wisconsin and central Michigan into New York and central Pennsylvania; then northeastward from Connecticut to the other New England States. The species is also present locally in the mountains of Virginia and West Virginia. In Canada it is widely distributed widely from Newfoundland and Labrador west through the more northerly portions of Quebec and Ontario, in scattered stands through north-central Manitoba and Saskatchewan to the Peace River Valley in north-western Alberta and east and south to southern Manitoba.

Balsam fir grows on a wide range of inorganic and organic soils originating from glaciation and generally falling within the acid Spodosol, Inceptisol, and Histosol soil orders. Frequently found in mixed stands with other species. Balsam fir grows on sites underlain by a variety of parent materials, including gneiss, schist, anorthosite, diabase, slate, sandstone, and limestone. It grows on all soil textures, from heavy clay to rocky. It tolerates a wide range of soil acidity. In the Lake States, balsam fir is most common on cool, wet-mesic sites with soil pH values between 5.1 and 6.0.Thus it is generally found in low swampy grounds where it is often the major component of forests. Also found on well-drained hillsides.

Seeds are sown in early February in a greenhouse or outdoors in March. Germination is often poor, usually taking about 6 - 8 weeks. Stratification is said to produce a more even germination so it is probably best to sow the seed in a cold frame as soon as it is ripe in the autumn. Stored seeds should be moist stratified 14 - 28 days at 1 - 5°C, though fresh seed may be sown in autumn without stratification, with target seedling densities in the nursery ca 450 - 500/m2, often mulched with sawdust. The seed remains viable for up to 5 years if it is well stored. When large enough to handle, prick the seedlings out into individual pots and grow them on for at least their first winter in pots. Plant them out into their permanent positions in late spring or early summer, after the last expected frosts. Of slow initial growth, the stock is usually out planted as 2- to 3-year-old seedlings or 3- to 4-year-old transplants Alternatively, if you have sufficient seed, it is possible to sow in an outdoor seedbed. One report says that it is best to grow the seedlings on in the shade at a density of about 550 plants per square metre [78] whilst another report says that they are best grown on in a sunny position. Trees often self-layer in the wild, so this might be a means of increasing named varieties in cultivation.

Balsam fir is monoecious and generally the flowers are in bloom in May.

The most commonly used parts of the tree are the whole branches, outer and inner bark, gum and the leaves for its commercial and medicinal applications.

• They had taken it internally for colds, coughs, and asthma.

• The inner bark, brewed into a tea, served as a remedy for chest pains.

• The twigs acted as a laxative, when steeped in water. Bits of the roots were held in the mouth for mouth sores.

• The needles were used for sweat baths.

• It is extensively used in the treatment of sore nipples by many women.

• The inhaled vapour was believed to clear up congestion of cold and coughs.

• It is used to treat topical problems of all kinds; the balsam fir is used in the form of a healing and analgesic protective covering to deal with all sorts of burns, to treat bruises and to heal general wounds on the skin.

• The resin or the sap for the treatment of corns and warts and even to deal with serious disorders like cancer.

• Problems like gastrointestinal inflammation and problematic urinary infections are easily cured by an herbal decoction prepared from the inner bark of the balsam fir.

• The gum of balsam is also employed in the treatment of a toothache if the cause of the ache is an abscess in the root of the teeth.

• Balsam oil and turpentine are by-products of its resin.

• Balsam fir is a major food of moose during winter.

• Balsam fir is a popular Christmas tree in the East and grown on plantations for this purpose and the branches are used to make Christmas wreaths.

• The fragrant needles are used as a stuffing in souvenir pillows sold in New England.

• It can be used in screenings, mass plantings, and windbreaks but requires abundant soil moisture for these purposes.

• Bark blisters contain oleoresin, which is used in the optics industry as a medium for mounting microscope specimens and as a cement for various parts of optical systems.

The astro reports for the fir tree say that it is governed by the celestial body Jupiter.
Cultural Significance

The first known record of a modern Christmas tree comes from Strasbourg in 1605 when fir trees were set up and decorated. Perhaps the Christmas tree was a more modern expression of an older link between the fir with its bright flaming wood and the birth of the New Year and the new sun. In Ireland, AT Lucas records several instances in counties Cork and Kerry of logs of fir tree being especially burnt on Christmas Eve to provide a good blazing fire. In Carbery the Bloc Nollag (Christmas Log) was often made of fir tree, and the priest would have pine and palm in the church. In Maigh Cuilinn, Co Galway, pieces of dry pine wood would be used as candles at Christmas time 'on account of the light it gave off'.

There was a story of a woodcutter who finds a tree on the hillside that sings every Sunday when the church bells ring. This is quite miraculous in itself but this woodcutter decides that he will make it into something "better," a statue of the Virgin Mary. He succeeds in creating his masterpiece and everyone is wowed by the statue singing in church on the day it was installed....but that is the last time the fir tree, now a statue, sang.