The other common names for the dove tree are Handkerchief Tree and Ghost tree.

This elegant and rather exotic looking tree is still rare in cultivation in Europe. It was believed to have been extinct after the glacial era; however, in late 19th century some specimens were found in Sichuan, China. Dove tree was brought to Britain in 1903 and cultivated as a rarity in some gardens of the tempered climate. Its main attraction is the large, white bracts surrounded around a small, green flower head in May. Owing to the bracts shape this plant is also called handkerchief tree. 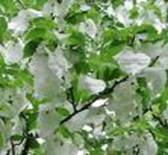 The genus Davidia is named after Father Armand David (1826-1900), a French Franciscan missionary and keen naturalist who lived in China. Although it was David who first described the tree, its introduction to the nursery trade was due to Veitch and the plant collector he hired to seek it out, the famous E. H. "China" Wilson (1876-1930).The location of a dove tree was given to Wilson, and after considerable effort he found the tree only to find a stump and a new house built from its logs. Fortunately for gardeners he discovered other trees in bloom about two weeks later and shipped seed back to England in 1901.

The dove tree is a deciduous member of the Nyssa family and attains a height of 35 feet, with a more or less pyramidal form. Leaves are heart-shaped and coarse textured. The bright to dark green leaves are roughly heart-shaped (cordate) and lightly serrated around the edges. The leaves of the species are white tomentose underneath, which appears as a fine white felt on the undersides of the leaves.

The flowers consist of a button-like mass of stamens which are surrounded by a pair of white bracts. The lower bracts can be three inches wide and six inches long with the upper about half that size. When the trees bloom in late spring it is robed in fluttering white flowers and it becomes apparent why it has such unusual common names. The fruit, a 3cm (1in) drupe, ripens in the late autumn. There is a deeply ridged nutlet inside, and within the nutlet there may be up to ten seeds. Young tree has a pyramidal-shaped crown, growing more rounded and broad with age.

The tree is native to central China, from Hubei to southern Gansu, south to Guizhou, Sichuan and Yunnan.

Grow in full sun or part shade in fertile and it needs a moist but well-drained soil. The dove tree generally avoids areas with strong winds.

It needs well-drained but constantly moist soil, rich in humus and preferably deep. Do not grow it in windy areas. It is fully hardy to -24°C (USDA zone 6) and can withstand temporary swings to -27°C in protected locations.Davidia appreciates a little shelter in its formative years, but will eventually reach a size where few other trees are large enough to shade it. This tree should be grown where it has room to spread and reach its fullest potential. Although tolerant of some pruning, Davidia can not be successfully maintained at a reduced size. Sow entire fruit in a container or bed outdoors, or take softwood cuttings in autumn and hardwood cuttings in winter. Germination usually takes two years.

Seedlings can grow rapidly, producing a flowering specimen in as little as ten years. For a tree, that's pretty remarkable. Recent tests suggest that the entire fruit should be planted for best results. Although there may be several embryos inside the nutlet, only one will germinate. These must not be removed from their protective shell. If you do clean away the leathery fruit that covers the nutlet, do not let the nutlet dry out, as this will inhibit germination. Germination can take up to eighteen months, but seedlings and saplings grow rapidly, almost as though to make up for lost time. Germination can be slow, during which time the seed should be exposed to the natural seasonal temperatures - though protect from dips much below -5°C (25°F)

The small pom-pom like blooms appear in mid-spring and are held between two uneven, pure white bracts that are up to 15cm long.

The leaves are the commonly used parts of the tree for its limited medicinal and commercial value.

• It is used by indigenous people to externally treat wounds, haemorrhoids and fractures.

• It is used in treating in treating stomach ulcers, ulcerative colitis, dysentery and diarrhea.

• It is mainly used in treating skin infections, fungi, rashes, and dermatitis.

• As a topical cream it was used for boils and sores.

• China where it reaches 20 metres in height. It deserves to be more frequently used here in landscape design, but trees under 20 years of age flower r sparsely.

• The bark has been used as a roofing material.

• The leaves are either eaten raw or cooked.

The astro reports for the dove tree say that it is governed by the celestial body Moon.
Folklores and Myths

The Dove tree (Davidia involucrata), whose flower became a symbol of the Przelewice Dendrological Garden and is embodied in the coat of arms of Przelewice Borough, is listed in the World Red Book of endangered and extinct plants worldwide. The folklores says that the tree got its name when on a windy day the white bracts of the flowers started fluttering like the white doves flying in the sky.