The other common names for the tree are conker tree, Spanish chestnut, bongay, Chestnut, robkastanie, marronier d'Inde and buckeyes.

Horse chestnut was first documented as a medicinal plant in 1565, in Pierandrea Matthioli's translation of Dioscorides' Materia Medica. American Indians of the Northeast used a snuff made from horse chestnuts to relieve cold symptoms and carried the nuts to ward off rheumatism. 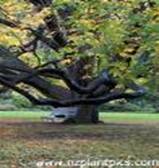 The crushed unripe seeds of the buckeye were scattered into streams to stupefy fish, making the fish easier to catch. Horse chestnut is one of the easiest British trees to identify and its leaves are often the earliest to appear. They are preceded by the famous 'sticky buds', and soon open to form the familiar five to seven-fingered leaflets on a stiff green stem. It has been planted so extensively in communities that it is the "Buckeye" with which many people are most familiar. The tree grows well in these urban conditions.

It is a medium to large deciduous tree that typically grows 50-75' tall with an upright oval-rounded crown. The leaves are opposite, palmately compound leaf with usually 7, obovate, serrate leaflets (4 to 6 inches long), dark green above and paler below, petioles as long as leaflets. Leaves mature to dark green in summer. Fall color usually consists of undistinguished shades of yellow and brown. The tree produces an abundant show of upright white flower spikes that are arranged round the canopy like candles.

Showy white flowers with red or yellow markings appear in upright terminal panicles in mid-spring . Fruit is a globular dehiscent capsule consisting of 1-2 horsechestnut(s) encased by a leathery light brown husk covered with sharp spines. Fruit on the tree is interesting but not particularly ornamental. When ripe, each horsechestnut turns a handsome shiny dark mahogany brown with a round light tan scar. The twigs are stout, with a large shield-shaped leaf scar; terminal buds are large, shiny, sticky and reddish brown, lateral buds are much smaller. The bark is light to dark brownish grey, developing irregular scaly, rough ridges.

Horse chestnuts are a native of Greece and the Balkans, but have been introduced to many temperate countries around the world. In the UK, it occurs virtually everywhere except the Scottish Grampian regions and the extreme northwest mainland and islands.

Horse chestnut can be found in parks, large gardens and estates, but it also occurs in the wild as a naturalised tree on various habitat types, ranging from damp fens and woods to upland road verges.

A horse chestnut tree is generally raised from the nuts. Horse chestnut nuts (no comment) should be preserved in sand during the winter, as they may become moldy and rot. If steeped in water, they will germinate more quickly. Horse chestnut will grow a foot the first summer and require little care. Horse chestnut thrives in most soils and situations, but does best in a good, sandy loam. Seed are best sown outdoors or in a cold frame as soon as it is ripe. The seed germinates almost immediately and must be given protection from severe weather. The seed has a very limited viability and must not be allowed to dry out. Stored seed should be soaked for 24 hours prior to sowing and even after this may still not be viable. It is best to sow the seed with its 'scar' downwards. If sowing the seed in a cold frame, pot up the seedlings in early spring and plant them out into their permanent positions in the summer. Horse chestnut bark and seeds are collected in autumn. Horse chestnut bark is stripped in the spring and dried in the sun, or by slight artificial heat. Horse chestnut bark is odourless, but has a bitter astringent taste..

Canker, coral spot, leaf blight and scale insects. Leaf blotch can be a significant problem. Powdery mildew and anthracnose are also frequent problems. Watch for bagworms, Japanese beetles and borers are infrequent but potentially troublesome. Leaf scorch (brown edges) may occur in droughty conditions or on sites exposed to wind.

The most commonly used parts of the tree are the bark which is collected in autumn and preference is given to the bark from the younger branches.

• The seed extract has also been used for hemorrhoids.

• Horse chestnut has been used for swelling and pain due to varicose veins and chronic circulation problems.

• It has also been used for reducing the swelling of hemorrhoids or veins (phlebitis).

• Japanese scientists found that horse chestnut having sufficient antioxidant activity to have potential against wrinkles.

• Soothing and astringent salves containing horse chestnut and these other herbs can be mixed for use.

• It is used in treating arthritis, neuralgia, hemorrhoids, and reduction of edema caused by trauma or surgery.

• A decoction of horse chestnut leaves has been given for whooping cough.

• Poultices of the seeds were used topically to treat skin ulcers and skin cancer.

• The topical preparation was also used to treat phlebitis.

• Saponins in the seed are used as a soap substitute.

• The wood of this tree is used by woodcarvers and turners.

• A yellow dye is obtained from the bark is of commercial importance.

• It has been widely planted in the Midwest as a street and shade tree.

• A starch obtained from the seed is used in laundering.

• The wood is used for furniture, boxes, charcoal.

According to the astro reports the chestnut tree is under the celestial body Jupiter.
Cultural Significance

To the ancient Greeks, the sweet chestnut was dedicated to Zeus and the name castanea comes from Castonis, a Town in Thessaly in Greece which cultivated the tree extensively. However, the Greek name was Sardis Glans, (sardis acorn). This name comes from the name of the capital of Lydia, now in Turkey, from where the trees originated. They were also called the "acorns of Zeus", as were walnuts. There is an interesting annual festival in the village of Mourjou in the French department of Cantal.

This is the hilly, wooded region known as the Chataignerie (or 'chestnut grove') in the southern Massif Central. The two-day fair in October, for which planning starts eight months beforehand, is an exuberant mix of food, music, folklore, conservation and chestnuts, which attracts 20,000 visitors and most villagers take part. Tractors and forklifts loaded with giant cauldrons and sacks of apples rattle through the tiny Place de l'Eglise. Stalls and marquees go up outside the Mairie and line the roadside. Great bundles of leafy chestnut boughs are carted through the village to decorate the stands. This is the annual Foire de la Châtaigne, the chestnut festival.

The name 'conker' as a corruption of conqueror linking to the game of the same name and presumably to the victor of the Battle of Hastings. Grigson (1973) supports this and tells us that Ribwort Plantain Plantago lanceolata flowers were used for a similarly named game in Somerset. The name "horse chestnut" arose because the Flemish ambassador to Turkey from 156 to 1562, a certain Ogier Chislain de Busteq, visiting the court of Suleyman the Magnificent, saw Turkish soldiers feeding the fruit to their horses. The best known is the children's' game of conkers which started to be played in the 18th century.