The other common names for the tree black walnut are Walnut, White Walnut and English Walnut.

Black walnut (Juglans nigra), also called eastern black walnut and American walnut, is one of the scarcest and most coveted native hardwoods. The first historical accounts of walnut trees growing under civilized cultivation was in ancient Babylon (Iraq) about 2000 B.C.; however, walnuts have evidently been attached to mankind much earlier by excavations from cave fossils as suggested by archaeologists. The Romans treasured it immensely both as a fruit-bearing tree as well as for providing furniture wood. The Romans valued the tree so much that they even brought it into Germany and also Britain. 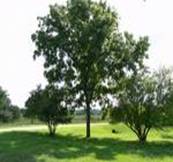 Walnut is basically native to northern Persia and its Greek names 'Persicon' provides ample hint of its origin. On the other hand, the walnut's other Greek name 'Basilicon' is an indication of the high esteem they held the tree in. From 'Basilicon', the walnut derived its explicit name 'regia' meaning 'royal'. Again, if Pliny is to be believed, the walnut was also known as "Caryon' - the basis of the name Carya, the Hickory. This was probably owing to the lethargic feeling generated in the mind on smelling the leaves of the tree. However, others are of the view that the walnut got this name owing to the similarity of the kernel to the shape of the human brain.

Black walnut is a medium to large tree up to 100 feet in height that develops a straight, clear bole with a narrow crown under competition, twigs and branches quite stout. The bark is brown on surface, darker brown when cut, ridged and furrowed with a rough diamond pattern. The leaves are alternate, pinnately compound, 12 to 24 inches long with 10 to 24 leaflets, leaflets are ovate-lanceolate, finely serrate, and 3 to 3 1/2 inches long, rachis is stout and somewhat pubescent; yellow-green to green above, slightly paler below. Walnut is monoecious; male flowers, which are slender catkins, develop from axillary buds on the previous year's outer nodes, while female flowers occur in short terminal spikes, ranging from a few to many, home on the current year's shoots.

The fruit is round 2 to 2 1/2 inches across, with a thick, green indehiscent husk. The husk contains an irregularly furrowed, hard nut that contains sweet, oily meat, mature in late summer to fall. The twig is stout, light brown, with buff-coloured chambered pith; buds are tan, and large with a few pubescent scales; leaf scars are 3-lobed, resembling a "monkey face".

Black walnut (Juglans nigra) is native to southwestern Ontario. It extends from western Vermont and Massachusetts west through New York to southern Ontario, central Michigan, southern Minnesota, eastern South Dakota and north-eastern Nebraska; south to western Oklahoma and central Texas; excluding the Mississippi River Valley and Delta, it ranges east to north-western Florida and Georgia. On the western fringe of its range in Kansas, walnut is fairly abundant.

Although it is found on a variety of sites, black walnut grows best on good sites in coves and well-drained bottoms in the Appalachians and the Midwest.

It thrives best in rich fertile woods and hillsides and in deep well-drained soils.

The best conditions for the growth of walnut trees include cavernous well-drained soil and enough of sunlight. However, the trees need to be protected from strong winds, which other wise tend to uproot the vegetation or even rummage the branches. The tree grows well in mildly alkaline heavy soil, but also flourishes in damp soils. Studies have shown that the walnut trees can withstand an annual rainfall in the range of 31 cm to 147 cm and annual temperature fluctuations from 7.0 to 21.1°C and relative pH in the range of 4.5 to 8.2.

The seed is best sown as soon as it is ripe in individual deep pots in a cold frame. You need to protect it from mice, birds, squirrels etc. The seed usually germinates in late winter or the spring. Plant out the seedlings into their permanent positions in early summer and give some protection from the cold for their first winter or two. The seed can also be stored in cool moist conditions (such s the salad compartment of a fridge) over the winter and sown in early spring but it may then require a period of cold stratification before it will germinate.

Black walnut flowers generally begin to appear about mid-April in the South and progressively later until early June in the northern part of the natural range.

Black walnut is damaged by a number of insects. Two of the most common defoliating insects are the walnut caterpillar (Datana integerrima) and the fall webworm (Hyphantria cunea). They are commonly found eating the leaves beginning in midsummer and continuing until September. Important boring insects are the ambrosia beetle (Xylosandrus germanus), which may introduce a Fusarium fungus into the tree, causing dieback and resprouting from the base of the tree. Black walnut is susceptible to only a few serious diseases, but their impact is significant. Two serious root rot diseases found in seedling nurseries are caused by the fungi Phytophthora citricola and Cylindrocladium spp.Walnut anthracnose, caused by the fungus Gnomonia leptostyla, is a leaf spot disease that begins during wet spring weather, although symptoms may not become visible until June or July. Another important foliage disease is target leaf spot which is caused by the fungus Cristulariella pryamidalis and is responsible for premature defoliation. Important stem diseases caused by fungi are the Fusarium cankers caused by several species of Fusarium and the perennial target canker (Nectria galligena) commonly known as Nectria canker. Cankers usually occur on the main stem where a branch broke off and left an open wound.

The most commonly used parts of walnut are leaves, nut, casing and inner bark for its commercial and medicinal value.

• Walnut kernels will lower cholesterol in the body, thus lowering heart damage from disease and cause a dramatic reduction of fatty coagulants in veins and arteries.

• The leaves have been used as a laxative since antiquity, as well as to induce vomiting, stop bleeding, stop diarrhea, as a cure to many skin diseases and herpes, and to kill human internal worms.

• Especially useful in the treatment of skin diseases, black walnut is of the highest value in curing scrofulous diseases, herpes, eczema etc

• Walnut hull extracts have been used to treat liver problems, to kill ringworms, and to help lose weight.

• Walnuts are highly beneficial in providing all of the Vitamin B series, Vitamin E, and many minerals that are beneficial to keeping a healthy body.

• The husk is chewed in the treatment of colic and applied as a poultice to inflammations.

• The black walnut also known as Juglans nigra is another variety of walnut that is widely used to cure athlete's foot and parasitic infections.

• The pulverized leaves have been rubbed on the affected parts of the body to destroy ringworm.

• The oil from the ripe seeds has been used externally in the treatment of gangrene, leprosy, and wounds.

• The fine straight-grained wood made prize pieces of solid furniture and gunstocks.

• The wood is used for fine furniture of all kinds, interior paneling, specialty products, and gunstocks.

• Famous chefs of the world use walnuts in many types of cuisines including meats, vegetables, desserts, and soup preparations. A world famous dessert--made from walnuts, honey, and paper-thin, buttered, flakes of crusts--is called 'Baklava.'

• Black walnut trees have been grown mainly for their value in making expensive furniture; the nuts are harvested in considerably large quantities to use in baking, ice cream, and in candy recipes.

• Walnut hulls have found many uses in a powdered state as a metal polish, as a thermal insulator in rocket nose cones and as a mysterious, secret ingredient in women's cosmetics.

• Walnut tree extracts have been used for centuries to make ink and dyes.

• The Egyptians used walnut kernel oil to embalm mummies by replacing the blood with walnut oil.

• The woody shells on the fruits have been used to make jewellery.

• They are also used as an insecticide against bed bugs.

According to the astro reports the tree black walnut is under the governance of the planet Sun and the zodiac sign Leo.
Cultural Significance

The walnut was in fact brought from Persia to Italy by Vitellius and was called Juglans or "Jove's acorn". The walnut is considered to be sacred and all festivals of the Greek Goddess Diana were organized in the shade of the tree. It is likely that from here began the custom of scattering walnuts at the weddings originated.

Greek mythology records that Carya, (the Latin genus name for walnut), who fell in love with the Greek God, Dionysus, was transformed into a walnut tree at her death. The wooden walnut columns (and later, marble) at the Acropolis that stand above the city were transformed into her human image (catyatides) that today can be seen by tourists in Athens, Greece. Walnut is believed to access divine energy and brings gods blessings.Folklores says that walnut brings our wishes true. There is a myth saying walnut helps in infertility.