The other common names for the tree balsam of Gilead are Balm of Gilead, Popular buds and Balm tree.

The herb's popular name is derived from the Greek balsamon, meaning fragrant oil, while Gilead refers to its ancient cultivation on Mount Gilead in Israel. 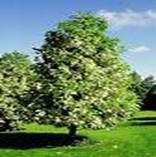 The genuine Balm of Gilead, highly esteemed by the ancient Arabs, Egyptians, Turks, Greeks, and Romans was extracted from this small tree. The word "balm" is a contracted form of "balsam," a word derived from the Greek balsamon,which was adopted as the representative of the Hebrew words baal shemen,meaning"lord" or "chief of oils." The Hebrew name of this balm was tsori.The tree yielding this medicinal oil was probably the Balsamodendron opobalsamum of botanists, and the Amyris opobalsamum of Linnaeus. The oil or resin, exuding through an orifice made in its bark in very small quantities, is esteemed of great value for its supposed medicinal qualities.

The American balm of Gilead is a species of poplar (Populus candicans) of the family Salicaceae (willow family) which has large balsamic and fragrant buds. The poplar is closely related to, and sometimes considered a variety of, the balsam poplar (P. tacamahaca), which has also been called balm of Gilead and tacamahac.Balm of Gilead is a small tree to 4m (12ft) with spreading branches like wands and reddish-brown bark. The leaves are divided into groups of three, small and sparse. Small reddish flowers are followed by pea-sized reddish-grey berries.

In summer the tree exudes a sweet-smelling resinous juice. The true opobalsam, according to Prosper Alpinus, is at first turbid and white, of a very strong pungent smell, like that of turpentine; but much sweeter and more fragrant, and of a bitter, acrid, astringent taste: on being kept for some time, it becomes thin, limpid, light, of a greenish hue, and then of a gold yellow, after which it grows thick like turpentine, and loses much of its fragrance. The male and female flowers are borne in separate catkins 6 inches or less in length, which appear before the leaves.

Balm of Gilead is cultivated in the countries bordering on the Red Sea -Saudi Arabia, Egypt, Sudan and Ethiopia. Introduced to Italy. Cultivated in Europe & N. America.

The balm-of-Gilead tree, which has mostly escaped from cultivation, is found along roadsides or streams from Newfoundland to Minnesota and Georgia. Prefers a deep rich well-drained circumneutral soil, growing best in the south and east of Britain.

Seeds are sown as soon as it is ripe in spring where the seed has an extremely short period of viability and needs to be sown within a few days of ripening. Surface sow or just lightly cover the seed in trays in a cold frame. Prick out the seedlings into individual pots when they are large enough to handle and grow them on in the cold frame. If sufficient growth is made, it might be possible to plant them out in late summer into their permanent positions, otherwise keep them in the cold frame until the following late spring and then plant them out. Most poplar species hybridize freely with each other, so the seed may not come true unless it is collected from the wild in areas with no other poplar species growing. The leaf buds, as they swell in the spring, and the young leaves have a pleasing fragrance of balsam. The fragrance is especially pronounced as the leaves unfold.

The male and the female flowers borne in seperate catkins appear before the leaves which generally take place between May to June.

It is very susceptible to bacterial canker. Cankers usually occur on the main stem where a branch broke off and left an open wound.

The leaf buds are the most commonly used parts of the tree for its commercial and medicinal applications.

• Balm of Gilead is used for treatment of sore throats, laryngitis and bronchitis

• Balm of Gilead is used to soothe ailments of the mucous membranes.

• It is taken internally to ease coughs and respiratory infections.

• The balm is also said to relieve laryngitis and sore throats. It can also be combined with coltsfoot to make a cough suppressant.

• It is prescribed for treating diseases in the urinary tract.

• The oil which is and antibiotic is used to relieve pain and inflammation.

• Balm of Gilead is also used in treating for dry and scaly skin conditions such as psoriasis and dry eczema.

• It gives relief from the pain and inflammation caused by rheumatism and arthritis.

• Balm of Gilead was valued for its scent and once used as a beauty aid by ladies of the royal courts.

• It is used in the manufacture of odoriferous unguent and cosmetics.

• The dried leaf buds are added to pot-pourri.

According to the astro reports the tree Balsam of Gilead is under the dominion of the planet Saturn.
Cultural and religious Significance

There are biblical references to the Balm of Gilead in Genesis and Jeremiah, and the Queen of Sheba is said to have presented a tree to Solomon as a gift. The writings of Pliny the Elder indicate that the tree was brought to Rome in the first century A.D.The Ishmaelites from Gilead were bearing balm when they bought Joseph from his brothers.

Folklores say that it is used love magick, where it attacks new love and help in mending broken hearts. Balm of Gilead is helpfully in protecting from evil and manifestations of spirits. It is called as an emblem of Palestine. Cultivated shrubs were protected by gurads.The tree native to Yemen was believed to have introduced to Palestine by the queen of Sheba on her famous visit to King of Solomon. It was later cultivated in Palestine mostly around Jericho where it still existed during the Roman conquest soliders carried the balm branches back to Rome as symbols of their having defeated the Hebrews.