Gaultheria, for Jean Franois Gaultier (1708-1756), Canadian physician and botanist who made botanical studies of the Quebec region with Swedish botanist Peter Kalm (1716-1779). Kalm, an associate of Linnaeus, named the genus Gaultheria in honour of Gaultier in 1753 and procumbens, from the Latin, "prostrate". 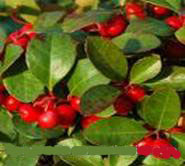 Wintergreen (Gaultheria procumbens ) is related to the Northwest native evergreen groundcover Salal which was used by Quinault & Klallum Indians for its medicinal properties. Interestingly, when the American nationalists boycotted the British tea during the American Revolution, they used the wintergreen tea as a substitute. Chemists discovered as far back as the 1800's that Wintergreen has properties similar to natural aspirin (from the Willow tree (Salix Alba).Wintergreen was once famous as a native tea hence the regional name Teaberry, but it has fallen out of use because people have forgotten how to prepare it.

Wintergreen is an aromatic, evergreen plant with an underground or creeping stem producing erect branches not more than 6 inches in height, the lower part of which is smooth and naked, while near the ends are borne the crowded, leathery, evergreen leaves. This low ground-covering sub shrub has alternate evergreen leaves that are very pleasantly fragrant when crushed (smelling of wintergreen, naturally), making for easy identification.

The aroma of the crushed leaves is similar to that of Sweet Birch (Betula lenta), but more intense. When the plant is young it bears pale or yellowish green elliptical leaves that are delicately jagged or toothed. The drooping white flowers are produced singly from the base of the leaves in June and July, followed by fleshy, bright red berries (with a sweetish taste and peculiar flavour), formed by the enlargement of the calyx. These are followed by roundish, somewhat flattened berries, which after they ripen in autumn, are bright red, mea]y, and spicy, and remain on the plant sometimes until spring. All parts of the plant are aromatic.

Wintergreen occurs throughout North Carolina, but is most common in the Mountains and eastern Coastal Plain. It is widely distributed in Eastern N. America and established on one site in Britain, in Scotland.

Wintergreen thrives best in sandy soils in cool, damp woods, especially under evergreen trees and oak woods. Requires a rich, acidic soil and semi-shaded, cooler site. Wintergreen is quite drought hardy once established and extremely cold hardy as well. Wintergreen is a cold-hardy plant that can withstand temperatures even as low as -35°C.

The seed requires a period of cold stratification. Pre-chill for 4 - 10 weeks and then surface sow in a lime-free compost in a shady part of the greenhouse and keep the compost moist. The seed usually germinates well, usually within 1 - 2 months at 20°c, but the seedlings are liable to damp off. It is important to water them with care and to ensure that they get plenty of ventilation. Watering them with a garlic infusion can also help to prevent damping of. Prick out the seedlings into individual pots when they are about 25mm tall and grow them on in light shade in the greenhouse for at least their first winter. Plant them out in late spring or early summer. The seedlings are susceptible to spring frosts so might need some protection for their first few years outdoors. The leaves remain very small for the first few years. Cuttings of half-ripe wood 3 - 6cm long, July/August in a frame in a shady position. They form roots in late summer or spring. A good percentage usually takes. Division can be carried out at almost any time of the year, but works best in the spring just before new growth begins. Very easy, larger clumps can be replanted direct into their permanent positions, though it is best to pot up smaller clumps and grow them on in a cold frame until they are rooting well. Plant them out in the spring. While the herb is collected during the fall, wintergreen fruits or berries are harvested both during the spring as well as fall. The leaves of wintergreen herb are gathered all through the year, but summer is the best time. Leaves of the herb are dried in the shade.

Wintergreen bears bell-shaped white flowers during the months of July-August and these are followed by red fruits.

Wintergreen is affected by Black mildew, powdery mildew, leaf gall and fungal spots. Plants in this genus are notably resistant to honey fungus.

The most commonly used parts of wintergreen are leaves, fruit and essential oil for its commercial and medicinal applications.

• When Wintergreen is applied externally, it reduces inflammation and swelling of painful joints and muscles.

• The oil of wintergreen was used in some of the first commercially prepared aspirin tablets.

• The leaves are used as a tea called mountain tea Oil of Gaultheria, or wintergreen oil, is derived via steam distillation. It contains methyl salicylate,

• Wintergreen is an antiseptic, analgesic, carminative, and antirheumatic.

• Wintergreen has also been used to ease the pain of rheumatism, muscle soreness, pain associated with menstruation and headaches.

• It was used as an antiseptic and as a treatment for asthma as well.

• Wintergreen has also been used in the treatment of bladder inflammation and diseases of the urinary tract, prostate and kidneys.

• Wintergreen leaf oil is also beneficial in healing cellulites, an infection caused by bacteria that leads to the swelling and irritation of the skin.

• The herb is robustly anti-inflammatory, has anti-septic properties and is comforting to the digestive system.

• Source of "wintergreen oil," which was used as a flavouring in candies, chewing gum, and some medicine.

• The berries are cooked into pies and eaten raw during the winter by some tribes.

• The leaves were used as a potherb or eaten as a snack.

• The essential oil is used as a food flavouring and in perfumery and toothpastes.

According to the astro reports the shrub wintergreen is governed by the planet Jupiter.
Folklores and Myths

It is said that a mere 6 milliliters of wintergreen oil can kill an adult human. The active ingredient in the oil is methyl salicylate, which is a compound similar to aspirin. In fact the oil of wintergreen was used in some of the first commercially prepared aspirin tablets. Ethnographic literature reveals many of equal empirical and aesthetic value. Earlier it was believed that heartburn is treated with a mixture of black cherry bark, wintergreen, and yellow dock, and 2 quarts of water, to be reduced over heat to 3 pints. It was taken in small amounts daily.