The species name Agnus castus originates from the Greek agnos castus, meaning chaste, as the Greeks thought the plant calmed sexual passion. The great Pliny, the famous Greek natural historian (23-79 A.D.), wrote that the herb "checks violent sexual desire". It is a well documented fact that medieval monks used the berries of the chaste tree in most of their meals so that it would keep them safe from their own sexual desires and appetites. 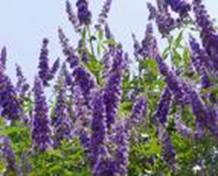 Perhaps this is the reason why the chaste tree is also known as "monk's pepper". However, the chaste tree has several kinds of medicinal properties as well. It is a normalizing herb for the reproductive system, a regulator of hormone production. The ancients ascribed many magical powers to this plant, and it was considered an important healing herb among the common people during the following centuries. Throughout Europe, where herbal medicine has more of an unbroken tradition than it does in the United States, agnus castus or "vitex" as it is usually called here is often used to help relieve the symptoms associated with female hormonal imbalances.

The chaste tree is a beautiful little deciduous tree or large shrub with a showy summertime flower display. The leaves are 3-4 in (7.6-10 cm) in diameter and palmately compound with 5 to 7 fingerlike leaflets. The foliage is likewise aromatic and is typically grey-green to dark green above and lighter on the undersides. The leaves also bear a striking resemblance to those of the infamous marijuana or hemp. When in bloom, due to the similarity of the flowers, the chaste tree is sometimes mistaken for butterfly bush (Buddleia). The chaste tree is a sprawling plant that grows 10-20 ft (3-6 m) and about as wide. Branched flower clusters are produced on new wood in late spring and early summer in a great flush that makes the tree look like a hazy purple cloud.

It continues to bloom sporadically until early fall. Not only is the tree strikingly beautiful when in full bloom, but it is also fragrant and attracts pollinating bees and hummingbirds make hungry visits. Flower colour ranges from violet to blue to deep purple. There is also a white form but to me they look dingy and uninteresting compared to their showier kin. Flowers are followed by a fleshy fruit that contains four seeds that are sometimes used as seasoning, similar to black pepper (monk's pepper is another of this species' common names).The fruit are borne terminally and in the upper leaf axils fruits - are drupes. The calyces are persistent and partially surround the maturing fruit. The fruit have been utilized as a pepper substitute.

This plant is indigenous to the Mediterranean countries and Central Asia. It is also found in parts of India and in Burma. Because of its many admirable attributes, the chaste tree is a garden favourite wherever in the world it can be grown.

Vitex thrives in wet conditions, with plenty of water, but at the same time, it grows well in drier environments and conditions too. It is often found growing next to streams and also sometimes in very dry, rocky spots on the Greek islands.

Easy to grow in almost any soil that has good drainage! Even tolerant of salt drift. The chaste tree can take care of itself, but can be pushed to faster growth with light applications of fertilizer in spring and early summer and by mulching around the plant. To propagate the chaste tree, one must put the cuttings in light, well-drained soil early in the spring before the buds of the tree begin to swell. Water them regularly and they will take root. The technique of layering can also be used with vitex. One has to be extremely careful when bending the young branches to the ground, as they have the tendency to split. Cover them with a very thin layer of soil and water them in dry weather, and they usually take root in about one year. One must set out the cuttings in March, but also be on the alert for frost. This plant has the tendency to sucker, so it would be an excellent idea to trim them to shape the shrub and concentrate the tree's energy on the fruiting shoots and top flowering.

Lavender or white flowers which bloom in early summer are followed by dry capsules with a peppery smell.

It is hardly ever disturbed by pests or disease but is susceptible to mushroom root rot and nematodes.

The most commonly used parts of the plant are roots, flowers, leaves and bark for its medicinal and commercial purposes

• TRoot juice is said to increases the growth of hair.

• TVitex is also known to promote the flow of breast milk in new mothers.

• TVitex seeds can also be taken to dispel "wind" or flatulence from the bowels, perhaps because of their hot nature, and this would be useful in promoting urination, checking and arresting diarrhea, and improving dropsy and spleen diseases.

• TDecoction of leaves may improve eyesight.

• TMigraine and acne, disorders related to the menstrual cycle can also be handled with the chaste berry.

• TThe seeds and the leaves were also considered effective against the bites of snakes and spiders.

• TThe fresh ripe berries are pounded to a pulp and used in the form of a tincture for the relief of paralysis, pains in the limbs, weakness, etc.

• The showy chaste tree makes a particularly effective specimen - use it as the centerpiece of a lawn or in large containers.

• TA perfume is made from the flowers.

• TA yellow dye is obtained from the leaves, the seed and the roots.

According to the astro reports the shrub vitex is under the dominion of the planet Mercury.
Quotes from History

Linnaeus described the plant as Vitex agnus castus in Species Plantarum (1753), naming De Plantis Epitome of Mattioli (1586), Royen's Florae Leydensis Prodromus (1740), Gronovious' Flora Virginica (1739-47) and Bauhin's Theatri Botanici (1623) as the authorities. Bauhin called it Vitex latiore folio. Fortunately this heritage has been preserved in documents of those times, and the two important works of the time, available in English editions are 'The Medical Formulary of AI-Samarqu.andi', from about 1200 A.D., and 'The Medical Formulary of AI-Kindi', in which agnus castus has been mentioned several times. It was Gerard, one of the best known Renaissance herbalists, who was responsible for collecting and gathering valuable information on the use of herbs from Roman and Greek sources, and also from folk remedies and professional herbalists of the time.

Chasteberry has been used since ancient times as a female remedy. One of its properties was to reduce sexual desire, and it is recorded that Roman wives whose husbands were abroad with the legions spread the aromatic leaves on their couches for this purpose. It became known as the chasteberry tree. During the middle Ages, Chasteberry's supposed effect on sexual desire led to it becoming a food spice at monasteries, where it was called "Monk's pepper" or "Cloister pepper." Thus it was believed that the chaste tree was believed to keep its owner chaste, with his sexual passions under check, according to ancient Romans and Greeks, and it was also assumed that the chaste tree was capable of warding off evil.