The other common names for the shrub quince are quince seed.

Quince is a widespread shrub found in the America's, Europe and Asia. Introduced to the UK in the 13th century, very common in the 16th-18th centuries being used for making marmalade. Cultivated in the Mediterranean area, it has become naturalised in many parts. Highly regarded by the Greeks and Romans, being the 'golden apple' given to Aphrodite as a symbol of love. An important fruit crop in South America where its cultivation reached a peak in the 18th & 19th centuries, then declined with the increase in popularity of soft fruit. 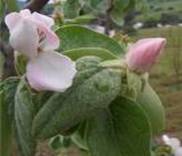 Quince jelly is a popular recipe, called in France - "cotignac", Spain - "membrilo" and "dulce de membrilo" in Argentina. The word "marmalade" is supposed to be derived from "marmelo", the Portuguese name for quince. It is certain that the ancient Greeks knew a common variety, upon which they grafted scions of a better variety, which they obtained from Cydon in Crete, from which place the fruit derived its name of Cydonia, of which the English name Quince is a corruption. Botanically, the plant used to be called Pyrus Cydonia, but modern botanists now place it in the genus Pyrus and assign it to a separate genus, to which the former specific name Cydonia has been given.

Quince shrub or small tree (genera Chaenomeles and Cydonia) of the ROSE family. The common quince (Cydonia oblonga) is a spineless tree. Its edible fruit is similar to the related Apple and Pear but is very astringent and is used mainly in preserves; marmalade is said to have first been made from quince. The fruit size varies according to the variety, but averages are 250 to 750 grams.

The pome or fruit is tomentose, obovoid, yellow when ripe, having a peculiar fragrance, and an austere, acidulous, astringent taste; cells 5; seeds many, in thick, soluble mucus. Fruits ripen in late autumn and containing seeds which are poisonous. The leaves are oblong-ovate, obtuse at base, acute at apex, entire, smooth above, and tomentose beneath. They are also untoothed dark green above paler underneath and hairy, turning yellow in the autumn. The flowers are solitary, white with a purple tinge, large, and terminal.

The quince tree is a native of Candia, but is cultivated extensively in this country and Europe, and its fruit is much employed in making jellies, preserves, etc. It grows wild in the forests north of Persia, not far from the Caspian Sea, and south of Caucasus, and also in Anatolia. As a commercial fruit tree, the quince is cultivated more widely in the temperate zone of Europe than in the United States, where it is grown chiefly in California and New York.

Propagation is generally by cuttings or layers, the former making the best plants, but taking longer to grow. The Quince forms a thick bush and is generally not pruned, unless required to form standard fruit-bearing trees, when it should be trained up to a single stem till a height of 5 or 6 feet is attained. Seeds are probably best sown in a cold frame as soon as it is ripe. It can also be sown in February. It requires stratification, pre-chill the seed for 18 weeks if it is fresh, whilst old seed will require 2 weeks of warm stratification first and then 18 weeks cold treatment. When they are large enough to handle, prick the seedlings out into individual pots and grow them on in the cold frame for at least their first winter. Plant them out into their permanent positions in late spring or early summer, after the last expected frosts. Cuttings of mature wood take place in November in a cold frame followed by layering in spring.

The large pink or the white flowers of the quince are in bloom in spring.

It is highly susceptible to fire blight and quince rust.

The seed and the fruit are the most commonly used parts of the quince shrub for its medicinal and commercial applications.

• Decoction of quince seeds forms a demulcent mucilage, very useful in gonorrhoea, dysentery, aphthous affections, and excoriations of the mouth and fauces; also as a collyrium in conjunctival ophthalmia.

• The fruit is astringent, and a syrup was once employed for diarrhea but today, the seeds are the only part of the quince that is used by herbalists.

• The seeds are also astringent and may be helpful for inflammations and soreness in the mouth.

• Quince softens and moistens the mouth and throat in fevers and other diseases.

• The mucilage heals the sore breasts of women.

• The leaves contain tannin and pectin which can be used as an astringent whilst pectin has a beneficial effect on the circulatory system and helps to reduce blood pressure.

• Quinces have been used for flavouring apple pies, ices and confections.

• The nature of pectin helps in setting of jam and jellies.

• A syrup prepared from the fruit may be used as grateful addition to drinks in sickness, especially in looseness of the bowels, which it is said to restrain by its astringency.

• A mucilage obtained from the seed coat is used as a gum arabic substitute to add gloss to material.

According to the astro reports the shrub quince is under the dominion of the planet Saturn.
Folklores and Myths

Historically, quinces are thought to be the golden apples referred to in classical literature and Greek mythology, since oranges were unknown in Greece and Italy until the time of the Crusades. The quince was the sacred fruit of Aphrodite, or Venus, and statues often depict her holding a fruit in her right hand. This is a reference to the coveted 'golden apple' awarded to her by Paris in recognition of her beauty. As a symbol of the love goddess, a single quince was traditionally eaten by the bride and bridegroom at the marriage ceremony to promote harmony and happiness. This custom survived into the Middle Ages when quinces were presented as tokens of love, and eaten at wedding breakfasts 'to be a preparative of sweet and delightful days between the married persons'.