The other common names for the shrub laurel are Sweet Bay, Bay Laurel and True Laurel.

The Bay laurel is often seen being used purely for decorative purposes, as the shape can easily be cultivated. It is the source of the ancients' crowns and wreaths for heroes and poets, and the modern term of `bachelor,' given for degrees, is probably derived from bacca-Zaureus, or laurel-berry, through the French bachelier. 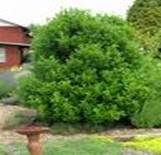 The name "bay" is used to refer to several botanicals - for example the West Indian bay - botanical name Pimenta racemosa, and the California bay - botanical name Umbellularia californica. Best known as a seasoning, bay laurel is an evergreen shrub or tree that is native of the Mediterranean area. Although bay can grow into a tall tree, it is often kept smaller by pruning or by confining it in a container. The National Emblem of Greece consists of a blue escutcheon with a white cross totally surrounded by two laurel branches. The Bay leaf, bay oil & bay fruit is a shrub both in cooking(leaf) & Medicine and this should make the Bay the worlds largest Herb.

Bay laurel is a pyramid-shaped tree or large shrub with aromatic, evergreen leaves and shiny gray bark. It can reach 60' in height in its native range, but generally is much smaller (3-10' tall) in culture. The leaves are elliptic, 3-4" long, rather thick and leathery, and shiny dark green. Clusters of small yellow flowers are produced in spring, followed, on the female plants, by shiny black or purple berries about 1/2" long. Bay laurel sometimes produces suckers from the base. The leaves also have the maximum oil content during early and mid-summer and this oil content tends to decreases in other seasons.

Bay laurel is native to the southern Mediterranean region. It is grown commercially for its aromatic leaves in Turkey, Algeria, Morocco, Portugal, Spain, Italy, France, and Mexico.

Bay is not too particular about soil and can tolerate soil pH from 4.5 to 8.3. However, a well-drained soil is important. Bay Laurel seeds should be sown in the spring with moist compost. The seeds are placed on the surface and covered with dry compost. Place the container in the dark, ideally at a temperature of around 65F (21C).Success is erratic and the seeds can take as long as 3 months to sprout a shoot. But normally they take about 3 to 4 weeks. The big danger with bay seeds is that they rot before they germinate. The other method is by cuttings in late summer to early autumn. Choose ripe shoots between 9 to 15cm (4 to 6in) long using a knife - leave part of the main stem (a heel) on the cutting. Plant at the same depth as it was planted in its original pot. Bay roots are very shallow and frequent watering may be necessary during dry spells. Also, use caution when weeding or cultivating around at the base of the tree. Trim so that only three or for leaves remain and place the cutting in a small pot filled with potting compost. Label the plant and place it in a site with no direct sunlight (a cold frame is ideal). One essential is high humidity, so a heated propagator offers the best chance of success. The cutting will have rooted after one year or so. Layering is done as normal. Simply bend a stem down to the ground. Using a penknife, make a small nick in the stem where it touches the soil. Cover the stem with soil and secure it there with stones or wire it down. Shoots should appear in six to twelve months. The best time to layer is in spring.

In the spring, bay has small yellow flowers which develop into purple berries in the fall.

For the most part, bay is pest free. In fact, it is often used to deter pests from other plants and in the pantry. However, scale can sometimes become a problem and there are moths that will lay their eggs between two leaves and sort of fuse them together with a cottony fluff. If you see two leaves that appear to be stuck together, gently peel them apart and remove the eggs or larva.

The leaves, fruits and the essential oil extracted from them are most commonly used for its medicinal and commercial applications.

• The solution made from the bay laurel is a very potent anti-dandruff rinse and can help a person suffering from excess dandruff in the hair.

• Chest related complaints like bronchitis and cough can be treated by bay laurel.

• An infused oil of bay has a long history of use as a pain reliever for arthritic aches and pains lower back pain, earaches, and sore muscles and sprains.

• Oil of Bays is used externally for sprains, bruises, etc.,

• It has a tonic effect and is good to have a settling effect on the stomach, the bay laurel remedy also stimulates general appetite and aids in the hastening the secretion of digestive juices in people with digestive disorders.

• It is used in treating altitude sickness and tooth decay.

• Bay Laurel is the source of the bay leaves which are used for their flavour in cooking.

• The wood is employed in marqueterie work, it is also used to make walking sticks and as friction sticks to start fires.

• Bay laurel essential oil is one of the strongest oils used in aromatherapy.

• The soap making industry also utilizes an essential oil obtained from the fruit of the bay laurel in the manufacture of some types of soaps.

The astro reports for the plant bay laurel say that it is governed by the planet Sun and under the dominion of the sign Leo.
Quotes from history

Bay laurel leaves were mentioned in the writings of the Greek physician Dioscorides who lived in the 1st century AD, he said that the bay laurel bark "breaks kidney stones, and is good for liver infirmities. A poet laureate is an accomplished poet, and the Roman poet, Ovid, retold the story of the Greek nymph, Daphne, who was transformed into a laurel tree by her father, Peneus, so that she could avoid the amorous pursuit of the god, Apollo. Thereafter, Apollo wore a wreath of laurel to show his love for Daphne.

The bay laurel was utilized in the performance of divination rites by the Delphic Oracle of Ancient Greece. The ancient Romans also made extensive use of the bay laurel leaves in medicine, they also used it as a spice and even a decorative garland was made from it for use in the festivities associated with the Saturnalia festival that was celebrated each December. The Greco-Roman gods Apollo and Aesculapius, who were gods responsible for healing and medicine, were also associated with the bay laurel and devotees made use of the plant in worship of these two gods.

Laurel has always symbolized victory and merit, and a baccalaureate (baca lauri, Latin for "laurel berry") still is a symbol of accomplishment. In the Bible, the sweet-bay is often an emblem of prosperity and fame. In Christianity it is said to symbolize the Resurrection of Christ and the triumph of Humanity thereby.

Bay laurel is the true laurel of Greek and Roman mythology.The bay laurel has also been associated with other legends of the ancient world, the ancient Romans for example, believed that the sudden withering of a bay laurel tree would bodes disaster for the household in whose garden the tree grew. The medications made from the bay laurel were believed to have extremely potent protective and healing effects. In addition, a plaster made from the bay laurel leaves was used to bring relief from wasp and bee stings and other insect bites. Bay laurel has been credited with magical properties, like protecting from witches, the devil and lightning.