The other common names for the shrub devils claw are Grapple Plant and Wood Spider.

he herb takes its common name from its large thorny seedpods, which are a hazard for animals when they become entangled in their fur - its botanical name is derived from the Greek 'harpago' meaning a 'grappling hook'. The nature of its name originates from the hooked, claw like seed pods attached to the flowers. 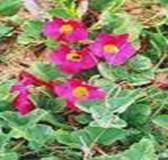 Devil's claw is a plant native to southern Africa. The active ingredients in devil's claw are believed to be iridoid glycosides called harpagosides, which are found in the secondary root. Devil's claw has a long history as a healing herb in its native land. It was used in remedies to treat pain, digestive complaints, migraine, fever and allergic reactions as well as rheumatic pain. The plant is an analgesic and anti-inflammatory and has a large export market in Europe and increasingly in the Far East and North America.

Devil's claw does not have an odor, but it contains substances that make it taste bitter. It is a leafy perennial with branching roots and shoots. It has secondary roots, called tubers that grow out of the main roots.

Its tubers grow off its tap root and are shaped like elongated sweet potatoes. From the flowers grow woody, sharply curved, sticky, barbed fruits, which give Devil's Claw its name. The plant spreads about 18" and has tubular pinkish white flowers which may have purple or yellow spots. The leaves are large and heart-shaped. Although the name comes from the fruit, the part of the plant used for its medicinal value is the tuber.

The types of habitats that the devil's claw herb thrives best in are clay or sandy soils; it seems to prefer the soils along roadsides and grows well in waste grounds.

CPlants are grown from seed - and the Devil's Claw does not give up its seeds easily. The young primary tubers are planted in carefully prepared strips of land using an organic protocol both to ensure top quality plants and to minimize impact on the natural environment. It takes four years for a plant to mature and only then does the local workforce hand harvest the long thin secondary storage tubers from deep in the dry savannah. The main tuber is then replanted and left to grow once more to maturity. Having achieved considerable success with this joint venture the next step is to ensure that local native farmers have the opportunity to become involved in sustainable cultivation. However, as any crop grown from scratch takes fully four years to mature, it requires both careful planning and considerable financial support. After these are harvested, they are cut into many pieces, each about 3/4 of an inch - or 2 cm in length. The tubers are usually carefully handled and are normally not mixed with the roots, because the tubers contain the important and essential compounds, mixing the two parts of the plant may render the herbal remedy prepared from the herbal ineffective.

There are no reports stating on the major pests and diseases affecting the devils claw but however very rarely it is disturbed by aphids and powdery mildew.

The sliced and dried secondary roots of the devils claw are used for medicinal purposes and commercial applications.

• Medicinal product of Devils claw is used for the relief of backache, rheumatic or muscular pain and general aches and pains in the muscles and joints.

• Devil's claw has been used for thousands of years in Africa for fever, rheumatoid arthritis, skin conditions, and conditions involving the gallbladder, pancreas, stomach and kidneys.

• It is used to improve digestion, as the bitter taste of devil's claw tea is thought to stimulate digestive juices.

• It has also been used for anorexia and dyspepsia, as a bitter tonic, and as an antipyretic.

• Devil's Claw has been used as a tonic, as a treatment for reducing fever, ease sore muscles, reduce cholesterol, and externally the ointment is used to treat sores, boils, and ulcers.

• For thousands of years, the Khoisan peoples of the Kalahari Desert have used devil's claw root in remedies to treat pain and complications of pregnancy and as a topical ointment.

• Topical preparations of devil's claw are also applied to the surface of the skin to heal sores, ulcers, boils, and skin lesions.

• Dried roots have been used to restore appetite, relieve heartburn, and reduce pain and inflammation.

• Devil's claw is used for degenerative joint diseases such as arthritis, for low back pain, and as an appetite stimulant and digestive tonic.

• Scientific evidence supports the use of devil's claw root to help relieve pain and inflammation in people with arthritis and other painful disorders.

According to the astro reports the shrub devils claw is governed by the planet Mercury.
Cultural Significance

The devil is commemorated in numerous names of plants that have been used medicinally besides devils claw.