The other common name for the plant camellia is Japanese camellia.

Camellias are shrubs that come mainly from China and Japan. Camellia japonica is the prima donna of the Camellia family. The genus name, Camellia, honours the work of Georg Josef Kamel, a Moravian Jesuit botanist (1661-1716). The species name, japonica, is Latin meaning 'from Japan'. 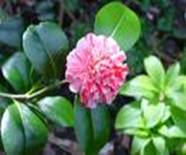 However, the plant also grows in the wild in Korea, China, Taiwan and other neighbouring islands. A long-lived evergreen shrub, the Camellia plant is a beloved Southern shrub with graceful blooms that have been enjoyed by gardeners for years. Introduced in 1719, 'Bokuhan' originated in the Kanto district of Japan, a region renowned for its contributions to the development of the modern camellia. 'Bokuhan' is a Japanese personal name meaning "companion in simplicity."

An evergreen, large shrub or small tree, growing to around 5m (15') tall and 4m (12') wide in cultivation, but larger in its native habitat. The leaves are dark, glossy green with a paler reverse. The flowers, which range in colour from pure white to deep red, are produced from winter to spring.

Though simple, the flower presents a striking colour contrast with a single outer ring of crimson-red petals wrapped around a dense cluster of tightly drawn, stark white petaloids.This type of flower is also referred to as having a "peony" center.Camellias flower from late winter to early spring. Its overall habit is upright and angular. There are thousands of named cultivars and they vary in foliage and habit, as well as in flower size and form. The foliage of the camellia plant is dark green and glossy adding evergreen interest to the garden.

Camellia japonicas are native to Japan, China and into Malaysia and India. For hundreds of years these magnificent plants were cultivated and treasured in their native countries.

Camellia thrives best in well drained fertile neutral or acidic soil, being happiest on acid sands with shelter from extreme sun or wind. Camellias will grow in most areas apart from the hot tropics and inland. It is generally seen in woods in hills and down to sea level near the coast in Central and Southern Japan.

Camellias prefer slightly acidic and well drained but moist soil. Camellia foliage will scald in full sun in hot summer weather so dappled shade is best. Seed can be sown as soon as it is ripe in a greenhouse. Stored seed should be pre-soaked for 24 hours in warm water and the hard covering around the micro Pyle should be filed down to leave a thin covering.It usually germinates in 1 - 3 months at 23�c.Prick out the seedlings into individual pots when they are large enough to handle and grow them on in light shade in the greenhouse for at least their first winter. Plant them out into their permanent positions when they are more than 15cm tall and give them some protection from winter cold for their first year or three outdoors. Keep in a cool greenhouse for the first year. Camellias should be pruned immediately after blooms fade as the shrub flowers on spring growth. Fertilize sparingly when new growth appears as camellias are slow growing and over fertilization can decrease the number of flowers. Thick mulch two-three inches thick is helpful as well because camellias are not drought tolerant.

Camellias often bloom during the cool season, the exact months of blooms varying according to the species. Winter blooms are common and flowers may appear anytime from October through March.

Prone to spider mites. Always inspect any new plant for pests before introducing it to your home or greenhouse. A fungus Glorerella cingulata can cause "dieback"; a problem for some camellias that causes first leaves and then branches to die. The other disease that can harm camellias is root rot.

The leaves and the flowers of Camellia are used for its medicinal and commercial applications.

• Contemporary medicinal uses of coca include use as a bactericide, as spinal anesthetics and as treatments for diseases such as eczema and shingles.

• The whole drug is said to be more stimulating and to have a mild astringency.

• Coca leaves are used as a cerebral and muscle stimulant, especially during convalescence, to relieve nausea, vomiting and pains of the stomach without upsetting the digestion.

• It is used to dilate the pupil of the eye and produces complete local anaesthesia.

• It is also employed as an anesthetic in medical examination conducted to check problems in the upper respiratory tract and the digestive tract in general.

• When the coca leaves are chewed in the mouth it brings a tonic effect on the body and helps the body ward off the effects of the cold, reduces physical exhaustion, and compensates for the poor nutritional value in the food.

• The traditional system of herbal medicine of South America employed coca leaves in treating problems such as nausea, vomiting, and to alleviate disorders like asthma, coca leaves were also used to speed up the convalescence of patients.

• The coca leaves are used to make an herbal heart tonic.

• An edible oil called tsubaki oil is obtained from the seed

• Dried flowers are cooked and thus used as a vegetable or mixed with gelatinous-rice to make a Japanese food called 'mochi'.

• A non-drying oil is obtained from the seed - used as a hair-dressing.

• A green dye is obtained from the pink or red petals

• This very popular shrub is used in borders and in formation hedges.

The astro reports for the plant camelia say that it is under the influence of the planet Venus.
Cultural Significance

Camellia is considered an auspicious symbol for the Lunar New Year since many camellias flower in winter and early spring in concert with New Year's festivities. In southern China, the flowers of Camellia japonica are offered at temples during this time to sweeten requests to the gods for the coming year. The camellia is also appreciated in China as a subject for penjing(literally, view in a pot), a Chinese garden art that influenced the development of bonsai in Japan.

Red camellias symbolize intrinsic worth and white blossoms mean loveliness. Displayed at Korean weddings as far back as 1200 BC, camellias represent longevity and faithfulness. Chinese women once considered camellias unlucky if worn for personal adornment since the lengthy time from bud to bloom implied a long wait for the birth of a son. Camellia enthusiasts would agree that C. japonica ranks first as an ambassador for the entire genus. It is the camellia seen in gardens across China, often to the exclusion of other species.