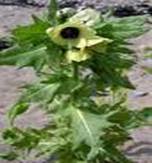 Henbane is a member of the Solanaceae family, to which belong the Potato, Tobacco and Tomato, and also the valuable Belladonna. The herb is also called Hog's-bean, and both its botanical name Hyoscyamus and the tenth-century Jusquiasmus are derived from the Greek words hyos and cyamos, signifying 'the bean of the hog,' which animal is supposed to eat it with impunity.

An old AngloSaxon name for it was 'Belene,' probably from the bell-shaped flowers; then it became known as 'Hen-bell,' and from the time that its poisonous properties were recognized this name was changed to 'Henbane,' because the seeds were thought to be fatal to poultry. It is inclined to think that the name Henbane is derived from the Spanish hinna (a mule), e.g. 'henna bell,' referring to the similarity of its seed-vessel to the bell hung upon the neck of the mules.

Black henbane is an annual or biennial plant that can grow to 3 ft.in height. The fetid smelling leaves are alternate, simple, toothed, up to 8 in. long and 6 in.wide.This herb is well distinguished by its mousy smell and the netted petals of the corolla and has an erect stem, slightly branched with radical leaves, wavy, divided nearly to the base, clammy, sticky, and hairy, light green or yellow. The upper leaves are clasping, stalk less, and the lower ones stalked.

The flowers are yellow, with a net of purple veins, drooping, large, broadly funnel-shaped, and arranged in one or two rows on the side of the flower-stalk, nearly stalk less and axillary. The fruit is erect, enclosed in the calyx, which does not fall, 2-celled, membranous, many-seeded, constricted in the middle, with the lid near the top. The seeds are pitted, flattened at the side, brown, with ridges, enclosing oblong or round areas. Flowering occurs in spring to early fall.

Flowers are cream to green, five-lobed, 2 in. (5 cm) wide and have purple throats. Seeds are small and black. The flower contains honey. The stigma and anthers ripen at the same time. The corolla is bell-shaped, plaited in hud. The hairy stamens are declinate, attached to the corolla base, with purple anthers, and provided with slits. The style is simple, the stigma pin-headed and prominent, ensuring cross-pollination. At first the stigma is longer than the stamens, but the tube grows, and the anthers are then on a level with the stigma, so that self-pollination is possible.

Native to western Asia and southern Europe, henbane is now found across much of western and central Europe, and North and South America. Henbane is cultivated for therapeutic use in parts of Europe, including England, and in North America.

Henbane is indigenous to Great Britain and found growing wild in waste places and on rubbish heaps. It thrives best by the walls of fields, waste ground, near buildings and in stony places from low-lying ground near the sea to lower mountain slopes.

The seed should be sown in the open early in May or as soon as the ground is warm, as thinly as possible, in rows 2 to 2 1/2 feet apart, the seedlings thinned out to 2 feet apart in the rows, as they do not stand transplanting well. Only the larger seedlings should be reserved, especially those of a bluish tint. The soil where the crop is to be, must have been well manured, and must be kept moist until the seeds have germinated, and also during May and June of the first year. It is also recommended to sow seeds of biennial Henbane at their natural ripening time, August, in porous soil. The ground must never be water-logged, especially in the first winter; it runs to stalk in a wet season. Drought and late frosts stunt the growth and cause it to blossom too early, and if the climatic conditions are unsuitable, especially in a dry spring and summer, the biennial Henbane will flower in its first year, while the growth is quite low, but well-mannered soil may prevent this. In order to more readily ensure germination, it is advisable to soak the seeds in water for twenty-four hours before planting: the unfertile seeds will then float on the top of the water and may thus be distinguished. Ripe seed should be grey, and yellowish or brown seeds should be rejected, as they are immature. Let the seeds dry and then sift out the smallest, keeping only the larger seeds. Henbane seed being very small and light should be well mixed with fine dry soil as it is sown. If any annuals come up among the biennials sown, the flowers should be cut off until the leaves get larger and the stem branches.

The most commonly used parts of the plant are fresh leaves, flowering tops, branches and seeds for its commercial and medicinal purposes.

The hollow deadish yellow flowers of the henbane are in bloom between the months of June to September.

Potato pests are generally fond of Henbane and make it susceptible to severe damage. The crops worst enemy is the Colorado potato beetle which prefers this plant to all the others in the same family. Destruction of the crop by insects is a common problem, sometimes the whole of the foliage is destroyed by the larvae of the leaf-mining fly and the crop is rendered worthless in a week. On emergence the terminal bud of the plant can be destroyed by one of the various species of macro-lepidopterous caterpillars which hide away in the ground.

• The leaves cool inflammations of the eyes, and any part of the body.

• Henbane assuages the pain of the gout, the sciatica and other pains in the joints which arise from a cold cause.

• Applied with vinegar to the temples and forehead, it helps the headache and want of sleep in hot fevers.

• The oil of the seed is good for deafness, noise and worms in the ears, being dropped there. The decoction of the herb or seed kills lice in man or beast.

• It is sedative and analgesic, depressing the brain and producing drowsiness thus used in the treatment of Parkinson's disease.

• Henbane is specifically used for pain affecting the urinary tract, especially pain due to kidney stones, and is also given for abdominal cramping.

• Henbane reduces mucus secretions, as well as saliva and other digestive juices and is used as a substitute for opium.

• Its most important use is in relief of painful spasmodic affections of the unstriped muscles, as in lead colic and irritable bladder. It will also relieve pain in cystitis.

• It is much employed to allay nervous irritation, in various forms of hysteria or irritable cough, the tincture or juice prepared from the bruised.

• Combined with silver nitrate, it is especially useful in the treatment of gastric ulcer and chronic gastric catarrh.

• It is used to relieve the griping caused by drastic purgatives, and is a common ingredient of aperient pills, especially those containing aloes and colocynth.

• A watery solution of the extract applied to the eye has a similar effect to that of atropine, in dilating the pupil and thus preparing the eye for an operation, or assisting the cure of its internal inflammation.

• It is used as repellent to drive away the mice when leaves are scattered about a house.

According to the astro reports the herb Henbane is strongly influenced by the planet Saturn.

The herb was used in magic and diabolism, for its power of throwing its victims into convulsions. It was employed by witches in their midnight brews, and from the leaves was prepared a famous sorcerer's ointment. Anodyne necklaces were made from the root and were hung about the necks of children as charms to prevent fits and to cause easy teething. In mythology, we read that the dead in Hades were crowned with it as they wandered hopelessly beside the Styx.

Quotes from History and Scriptures

There is mention of the herb in a work by Benedictus Crispus (A.D. 681) under the names of Hyoscyamus and Symphonica. In the tenth century, virtues of the herb were recorded under the name of Jusquiasmus. There is frequent mention made of it in AngloSaxon works on medicine of the eleventh century, in which it is named 'Henbell,' and in the old glossaries of those days it also appears as Caniculata, Cassilago and Deus Caballinus.